We had a nice Thanksgiving -- just Pat and I.  Dinner was small but delish and wasn't overloaded with carbohydrates.  Pat brined the turkey which made for a really juicy turkey.  The kids were off at their in-laws houses which means we'll be together for Christmas.  We trade holidays each year which works very well for all of us.

I was reading a blog this am and the blogger said there were 3 weeks until Christmas. Well, as of this Friday. But ARGH!  Three weeks?  Is that all?  I've been making progress on Christmas presents but I'm no where near to finishing all the things I'm planning on doing.  Here's the start of a pair of mittens I'm making for the girls.  One pair is done.  This one I started 3 times before I got the size right and followed the pattern correctly.  The girls will be getting mittens with a fleece hat to match.  Well, as well as I can match the fleece to the yarn I picked out. This yarn is Jelli Beenz by Plymouth Yarn Company. It is fun to see how it knits up.  Feels so soft.  My plan is to eventually make 3 mittens for each girl. Since the mitts can be worn on either the right or left hand I figure an extra one will come in handy if one is lost. 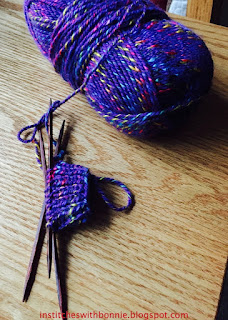 As long-time readers know I have 3 granddaughters 5, 3 and 2.  I generally make things for them in their favorite colors.  When I embroider items on things I generally pick a design for each girl.  I'm considering using the same design on the fleece hats I'll be making rather than using different designs.  I have a snowman design that will look really cute on the edge of the hat brim. You can see the directions and the darling hat here. I have several on the edge animals I could use but I have no idea about favorite animals.  Which is why I'm thinking the snowman will be easiest especially since I'm doing appliqué instead of stitching out each design.  I'm thinking I need to use a fleece for the appliqué design and I'd only need to buy one set of colors. (Or beg scraps off a friend.)   Any thoughts?  Anybody do machine embroidery?

Last week most of my time was spent finishing quilts for customers.  I forgot to take pictures of one of them so can only share this one.  The quilt was wonderful to begin with and she picked a perfect pattern and thread.  I'm sorry the quilting doesn't show well on the front in the picture. But the back is wonderful.  The design is African Samba, So Fine thread in a dark brown, Warm and Natural batting. You can see African Samba on the green, blue and beige quilt here. The design is so much better on this jelly roll race quilt. 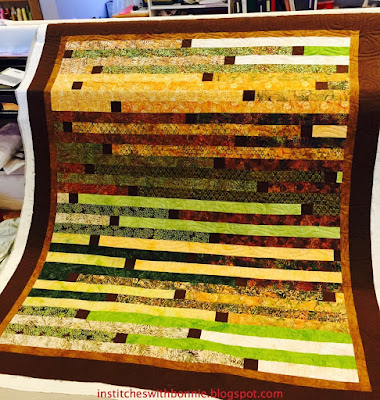 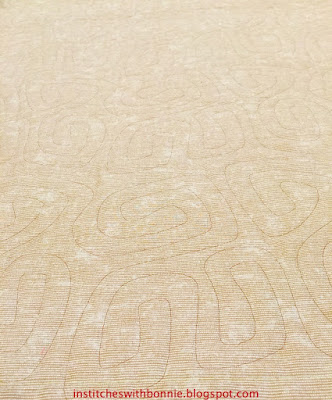 I did pretty well on my goals last week.  The hardest part is I'm getting busier and I can't remember if I did something last week or the week before.  Sigh.
Week of November 23, 2015
Quilt Jelly Roll Quilt 2√
Start Twinkle quilt√ finished
Continue sewing Easy Street together nothing done!
Make more mittens√ another one is started
Start some embroideries√
Quilt charity quilt√

Here's what's on tap for this week.
Week of November 30, 2015
Bind charity quilt
Do more embroideries
Finish 2 pairs of mittens
Finish snowballs
Work on quilt/s for Stacey
Try to squeeze in Easy Street

I'm connecting up with Monday Makings, Main Crush Monday and Design Wall Monday.  Take a look at what is going on all over the Internet.

And I don't mean it's a zoo around here.  While Sophia and Natalie were here this weekend we went to the Richmond Zoo.  I was afraid it wouldn't stand up to the National Zoo they visit in DC but I was definitely wrong. When we paid for our admission we also bought a cup of food and a food stick for each girl.  Boy, was that the right thing to do! 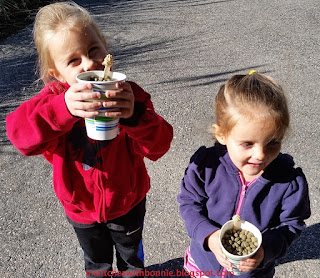 We arrived right after it opened and the animals were awake and hungry for the most part.  And NOISY! This guy reminded me so much of the king in Madagascar.  Those artists really must have studied ringtail lemurs to get the movements and postures correct. 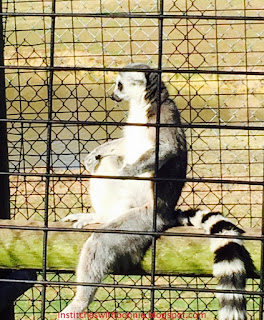 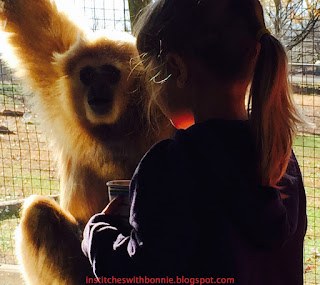 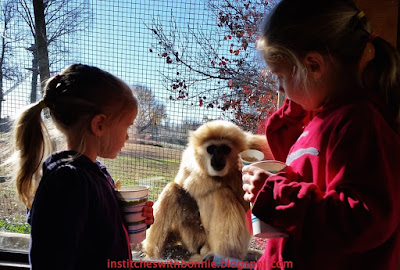 It really looks like the girls were in with the gibbon but there was a glass between them.  This cute guy was hooting and hollering the whole time we were with him.  He sounded surprisingly like a some little girls I know.  He had a small ledge that he sat on while he watched the kids as the kids watched him.

We saw a lot of other animals before we came to the big attraction of the Richmond Zoo -- the giraffes. Who wouldn't want to try to feed a giraffe? As we walked over to the giraffe enclosure we had giraffes on both side of us and we were actually looking at some right in the face!  It turns out that part of their enclosure is much lower so we could get a view of their faces up close and personal. 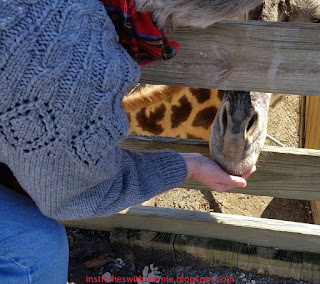 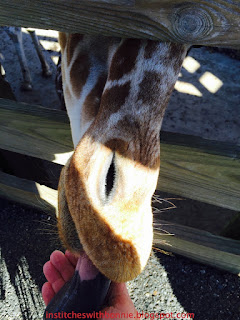 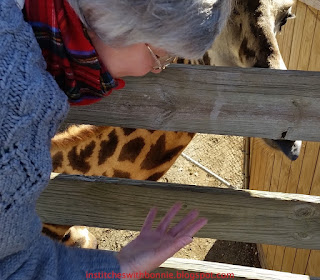 Yep, we could feed the giraffes but um, that was a long, wet, black tongue that came out to eat the pellets. Yuck!
Next up was a little petting section.  Of course the animals were much more interested in the food the girls were holding. 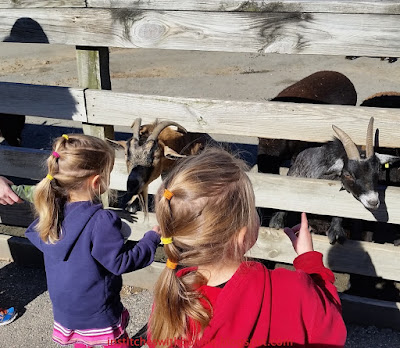 And then there was the sneaky camel.  He was happy to eat the food you gave him but when you started paying attention to the goats in the same enclosure he started eating your jacket or purse or a baby's outfit.  He didn't care what he tried to get! 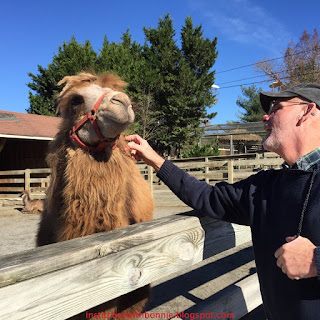 Near all the enclosures that allowed us to feed the animals there was hand sanitizer stations of which we made liberal use.

The Budgie enclosure was really cool except Natalie really didn't like lots of birds hanging around her.  The stick food was to feed these birds. 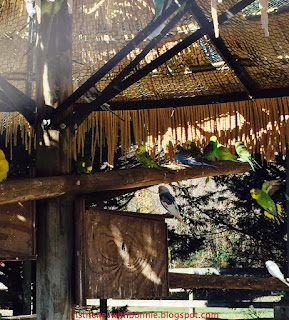 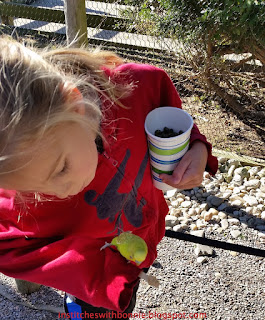 These birds were swarming whoever had a stick.  Some were pretty aggressive keeping others from getting to "their" food.  This was a great way to see canaries and budgies up close and personal...whether you wanted to or not!  Natalie was all about not.

We took a train ride to see some of the animals in a more natural habitat.  Pat and Sophie got a cute selfie. 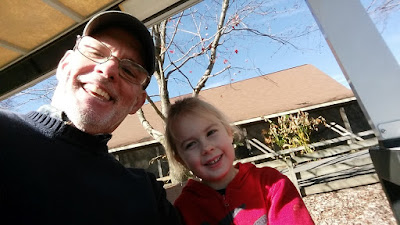 After a couple of hours the girls were getting tired and hungry.  We decided to leave the other section of the zoo for another day.  Yep, I'd say the girls really enjoyed the Richmond Zoo and will probably want to go see the animals they missed next time they come down.  Hopefully it won't be dead of summer.  By the time we were leaving the animals were quiet.  All but one of the prairie dogs was sleeping. The gibbon wasn't howling.  It was time to let the animals take a mid-afternoon siesta.  We could use a nap too.

It's time for me to get back to quilting.  I have one more customer quilt to get done this week.  And, then there are Christmas presents waiting to be done.

I am so happy to be making progress on my Easy Street.  I'm not sharing a picture because it doesn't look different from the last post here.  I've got half of the blocks sewn into rows.  Over the next few weeks I'll continue to work on this project -- but not as the primary project.  It's time to buckle down and get some Christmas "stuff" done.

I finished up the ornaments for Natalie and Sophie for LAST Christmas.  I made Ellie's before Christmas last year and she got hers on time.  Sophie and Natalie got theirs today.  I redesigned the scarf by the time I got to Natalie's  It was much easier to sew stripes instead of plaids! I'm happy to report I'm almost done with the first of the three ornaments for 2015.  And, I'll admit to having less stitching to do on each of them!
I'll be quilting several tops for customers over this week and next.  First I need to finish a small charity quilt I threw on in hopes of getting it done quickly.  Nope, need to finish it today and then get back to the bigger ones.

Goals were pretty well completed this week. YEA!
Week of November 16, 2015
Quilt Jelly Roll Quilt 1√
Continue sewing Easy Street together√ half of rows sewn together
Make up cross stitch ornaments√
Enjoy time with Sophie and Natalie√
Take down Halloween decorations and put up Thanksgiving…√
Order embroidery thread as needed oops, need to get on this soon!

I'll be linking up with Monday Making, Design Wall Monday and Main Crush Monday.  Well worth a few minutes to see what others are doing around the internet!