What a great month December has been for us!  My last post was 3 weeks ago -- Friday, December 8th.  The weather was gray and threatening snow.  Here are some highlights...

Spotsylvanians' dress rehearsal . . . a canceled Saturday night concert due to icing . . . a packed house for the Sunday matinee including our kids and grands . . . pizza at the house for the 10 of us after the show . . . finally, throwing everyone out of the house by 7:30 because we were going on vacation! (There was a big reason why my goal's list showed wrapping presents in late November!) First stop was a hotel near the airport so we wouldn't have to fight traffic in the morning.  A flight to Miami and another hotel.  Finally Tuesday we got on a ship and headed to the eastern Caribbean. 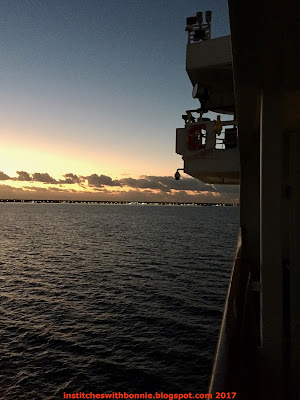 The view from our balcony arriving at Cozumel, Mexico. 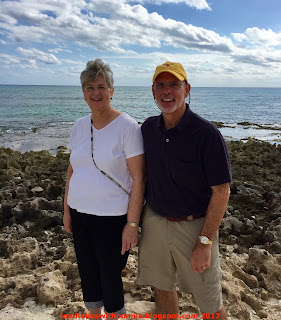 The tourists on a tour of Cozumel. (This is the only picture of both of us on the trip -- except a few selfies.) 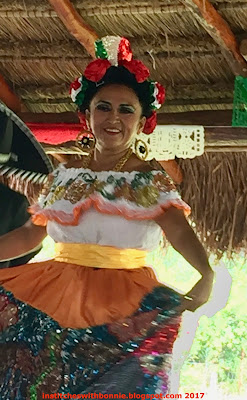 I've got quite a few more pictures of our 10 day cruise but it's time to get back to quilting.  I'll share more pictures over the next several posts.

I'm tickled to say I finished my OMG for December.  I was pretty careful picking the hand appliqué -- there wasn't a lot to do and it was portable!  Here's the apples and the pears all done. Hum, it looks a bit wonky to me.  I think the left pear may fall over before I get it in the quilt!  No picture of the bird but he's got his body and wing finished. Now to figure out the setting.  Then on to the borders that will have appliqué vines and flowers on them. 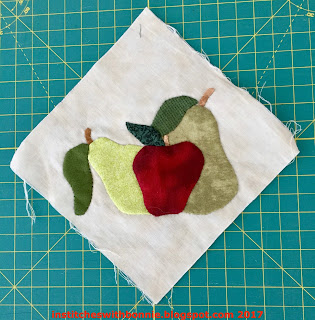 I'm linking up with Elm Street Quilts and Can I Get a Whoop Whoop.  I'm looking forward to getting back into checking blogs for inspiration and to keep up with my quilting friends.

Happy Quilting All!  Bonnie
Posted by Bonnie at 1:24 PM 7 comments:

I volunteered to quilt several quilts for Faithful Circle Quilters.  They are a big guild and are very involved with making quilts for charity so they almost always have quilts that I can quilt.  I did two right after Ruthie 2 was installed.  You can see the first one here.  This next one is a pineapple quilt which is rocking scraps! What a great quilt -- so fun and vibrant.  Wish I could give a shout out to the quilter... I'm not sure who did it.

I went to my go-to pantograph by Apricot Moon, Ginger Snap.  It looks good every time I use it, no matter if it is small or large.  I used a light blue Omni thread.  I was given the batting with the quilt so no clue which batting was sent to me. 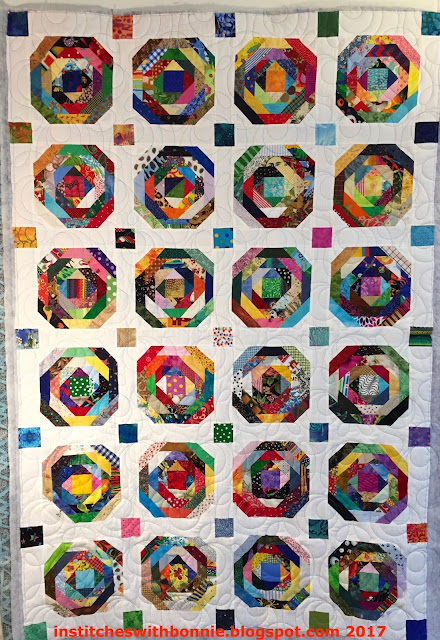 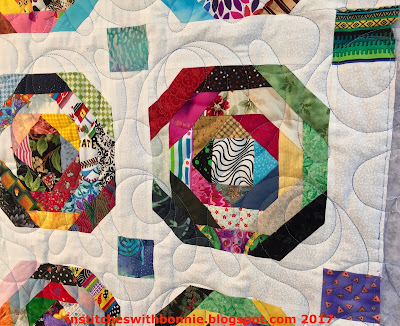 Special thanks go to Nancy.  We met for breakfast last week because she was in the area.  She took the two quilts up to give to Stephanie who was organizing the trimming and binding.

This weekend is our busiest of the year.  We will be rehearsing tonight and then singing concerts on both Saturday and Sunday.  The kids will be coming to the Sunday matinee and then there'll be pizza at the house for us afterwards.  I know I'll be exhausted when I hit the bed Sunday night.

I'm looking forward to some reading, stitching and knitting time next week.  I don't feel like I've done much of that recently.

Happy quilting all!  Bonnie
Posted by Bonnie at 3:18 PM 5 comments:

Even December seems to be streaming past me too fast!  I usually blog early Monday morning or late Sunday evening.  Not this week.  It's almost time for dinner on Monday and I'm just getting around to it.  Anyway, my blog this week is all about the December One Monthly Goal.

I'm picking, what I hope will be, an easy goal for me to achieve.  I've got so much going on over the month that I'm hoping I'll have time to finish two small hand appliqué blocks.  (and one is about half done!) These are the two blocks -- front and back as I am doing needle turn appliqué on them.  The bird and the branch one is well started.  The pears and apples I've done a little bit of the big basting stitches around the two pears.  (sorry, no picture of the front...you aren't missing much.)
We'll see how successful I am when January rolls around again.

Here are my goal results for last week.

And for this coming week!  Yikes lots of things taking me away from my quilting and piecing.
December 4, 2017
Embroider 2 more shirts for grands
Finish and mail cards
Sing 2 concerts
Wrap more presents

I'm linking up with my normal parties: Oh Scrap, Monday Makings, Main Crush Monday, Moving It Forward and One Monthly Goal December Link Up. Take a few minutes to see what folks are getting done this month.

I'm off to get dinner and get ready for the last rehearsal before the weekend concerts.