Another Design Wall Monday has rolled around and wow, a lot of things are happening around here.  First, Sandy is chugging past the Richmond area and isn't turning west near us.  But for those north of here it is going to be overwhelming.  We've had rain for the last 12 hours or so but the winds haven't been all that high.  We'll see how that goes.

Today I share a 1600 quilt.... that has been on a diet.  Usually 1600 quilts are made with 40 2.5" strips. This one was sent from Jane, the queen this month in the Queen Bee group I am in.  She sent 32 strips and those worked up to a decent size quilt.  I believe she will be donating them to Project Linus in her area.  Thanks Jane.  I really enjoyed how fast this went together. 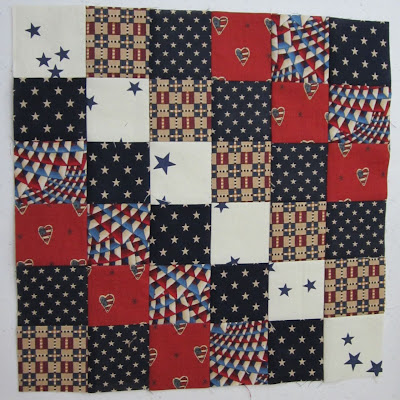 Have you visited Alycia Quilts recently?  I wandered over there this week and found she is doing a block drive.  She's got directions on this blog for making Bonnie Hunter's Scrappy Trips Around the World.  Thank yous to Bonnie for giving Alycia permission to use her block and instructions.  And the best part, all the blocks will be made into Quilts of Valor and given to wounded service men and women.  I whipped this one up last night.  The hardest part was finding fabric in red and blue.  White, I have covered.  What happened to those three fat quarters I bought recently?  And, to spur you on Alycia is offering an incentive.  For every 5 blocks you get to her before 11/15 you will be entered in a drawing for a 5 yard bundle of fabric.  Wahoo!  I want to win and I sure hope it is patriotic fabrics!
Here's are the goals... not great but I'm happy with what I did get done.


It's a wet Monday here on the East Coast.  I hope to do some more sewing and I'm hoping we don't lose power. For more Design Wall reports check in at Patchwork Times. Enjoy the inspiration.
Posted by Bonnie at 9:55 AM 5 comments:

Pat and I headed to the Eastern shore this week for a couple of days of relaxation.  We saw several fields of cotton that looked ready to be picked. 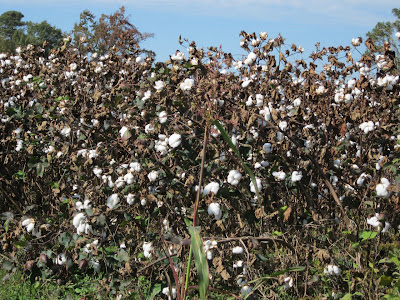 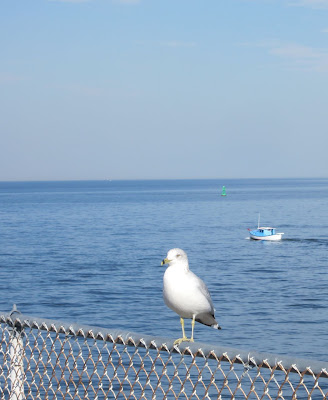 We stopped on the Chesapeake Bay Bridge Tunnel out of Norfolk.  It was a beautiful day to be traveling.  There is a nice stop to view the bay and where the bridge becomes a tunnel. This next photo was taken at the front of the area ... the tunnel is actually where the water is. 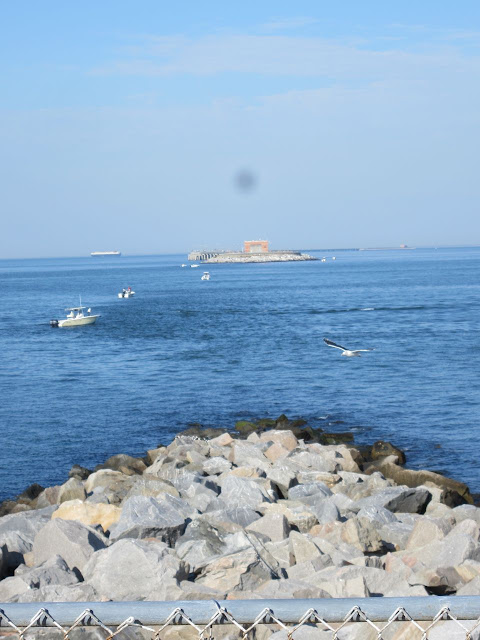 Sorry about that blob of black in the picture.  Evidently something was on my lens. 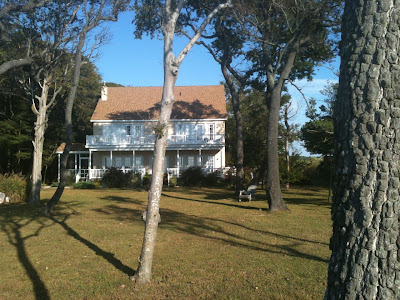 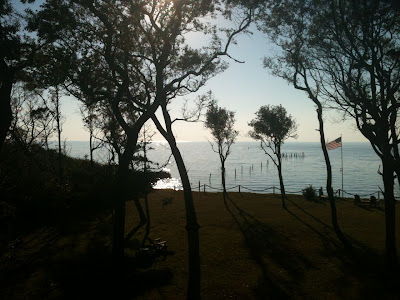 We spent one day visiting around the area.  These birds were in the Eastern Shore National Wildlife Refuge, Cape Charles, Va. 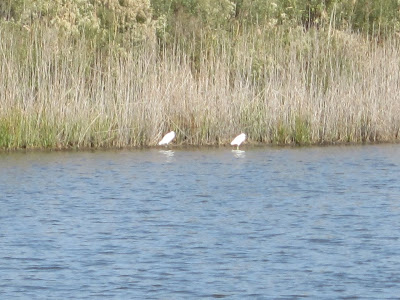 And, how about a few crabs? These were really small with one huge claw. 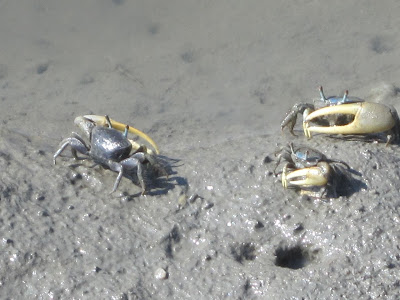 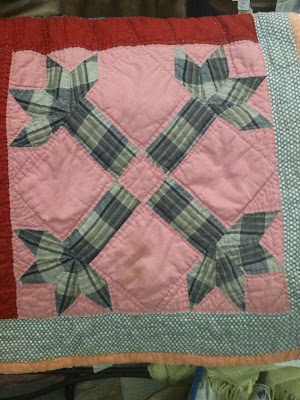 I snapped this picture at a big antique mall in the area.  Most of the quilts were not all that old and in bad condition.  I liked this pattern.  Notice the star on the bottom left appears to have been carefully planned while the other three were randomly cut and pieced.

The weather was beautiful the whole time we were there.  But, Sandy is heading our way, especially the Eastern Shore area.  I've had lessons on where to place the generator, how to start it, how long to run it.  And, I took notes!  Now to figure out how I'm going to get the garage door open with out power! 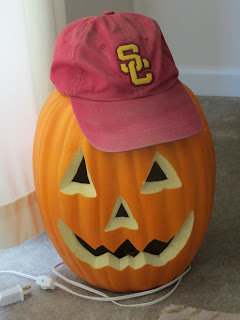 I leave you with Jack, obviously a fan of Univ. of Southern California.
Happy Quilting!

I'm late today because I went apple picking with the best buds!  And, let me tell you this was a hard orchard to pick in because the trees are almost terraced into the land.  We were on top of a mountain and were hiking up and down the hills trying to get to the apples.

I don't have any partial quilts to show you as I am working on Scrap Squad #5.  But, I haven't shown you #4 yet so I'll share it now.  You can see what I said about it on Quilty Pleasures.  I used Dream Green batting by Quilters Dream.  It was great to hand quilt but it doesn't drape as well as other batts.  It was great for this smaller wall hanging.  Here it is in the red bud tree. 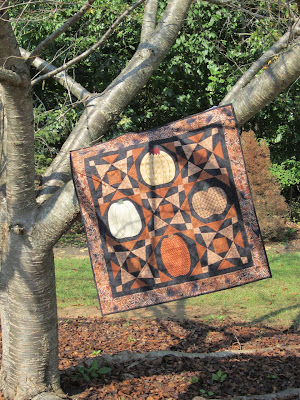 On to the weekly goals.

Week of October 22
Work on Scrap Squad #5
Draw Scrap Squad #6 in EQ
Take a few days off
Work on Sophia's sweater
Finish the small hexagon top
That's it for me today.  It's time to either make an apple cake or do a little sewing.  Decisions, decisions. And, don't forget to go to Patchwork Times to be able to visit design walls across the web.
Happy Quilting All!

Have you ever visited Winterthur in Delaware?  Winterthur is the former childhood home of Henry Francis DuPont and is now a museum specializing in American decorative arts. It also has a collection of quilts.  If you are traveling north it is well worth a stop at Winterthur.  It has spectacular gardens as well as the house and furnishings available for touring. 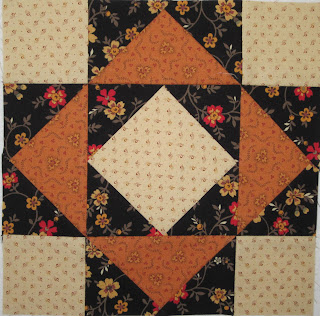 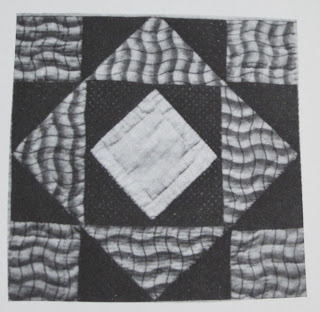 Once again I wasn’t able to find a name for this month’s block in the old quilt source I found the pattern in, American Patchwork Quilts by Lenice Ingram Bacon, copyright 1973.  Below are two colorations.  The one on the left, the antique block from the early 1800s, shows wonderful use of stripes by the maker, a master quilter. The one on the right is a different coloration from a recent magazine, "Sampler Quilts & Blocks" by Fons and Porter.  In that magazine it is called Triangle Squares. A slightly different coloration is shown in Barbara Brackman’s Encyclopedia of  Pieced Quilt Patterns that is also called Triangle Squares. 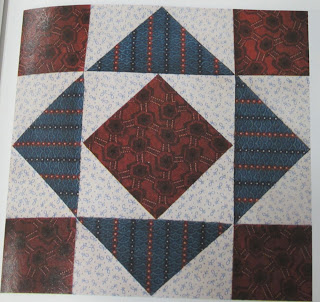 For mine, I used 3 fabrics: a dark, medium and light.  Changing the color values changes the look of the block as shown by these two examples.

As I was making this block I auditioned fabrics for the corners as well as reviewed the other blocks I had made to determine whether I wanted the block to be more dark or more light. I decided my quilt needed more lights. 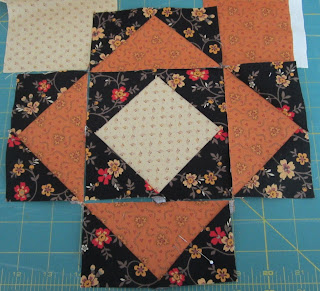 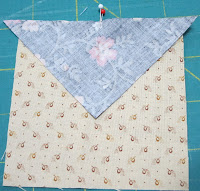 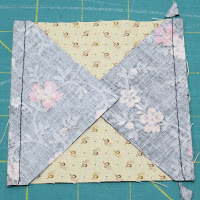 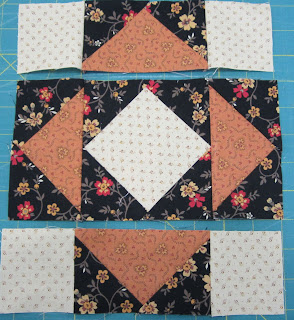 Layout the block as shown.  Sew into rows.  Iron the top and bottom row toward the center.  Iron the middle row to the flying geese units.  Sew the rows together.  This block is done.

Next month we will be making the last block.  If you have decided not to make the Tree of Life block consider going to Quilter’s Cache and use some of the 9” finished blocks to make 4 additional blocks for the center. www.quilterscache.com 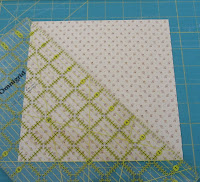 Next we need to put the tree of life block on point.  If your unfinished tree of life measures 9 ½” this measurement will work for you. I starched my fabric before I began cutting as we will be working with long bias sides.  A good starching makes it easier to work with the bias without stretching it.  Cut 2 -- 7 ½” squares of the desired fabric.  Carefully cut the squares on the diagonal.  This is actually a little bit more than you need  so you have some wiggle room. 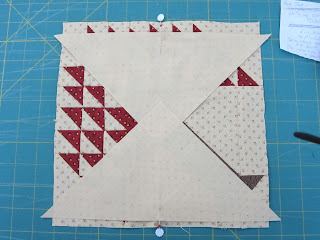 I recently found an app for smart phones or iPads that did the math for me.  It is called Quilt Calc from Robert Kaufman.  Some of what it calculates is finding backing and batting yardage from the size of the top, the number of certain size pieces that can be cut from a given size of fabric, size of square needed to set another square in a square in a square setting and other info.  And, best of all it is free.  Look for it at the iTunes App Store for Apple devices and Android Apps on Google Play.  (Hope the last one is right, I am an Apple person so I’m taking this info directly from a Google search.)

http://www.quiltersparadiseesc.com/Calculators.php
If your center block is substantially different from 9 ½” unfinished you should use this app to determine your setting blocks.  Note it asks for the finished size of the block, not the unfinished size. 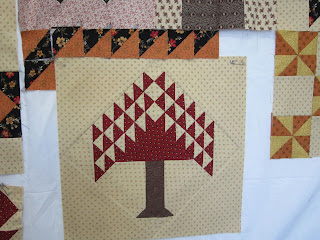 Here's what the whole quilt looks like now. Next month I'll present the last block and how to figure your own coping strip.  I am sure I'll be putting border/s of some sort on this quilt but I'm not sure what it will be yet. The November block will be the end of this quilt. 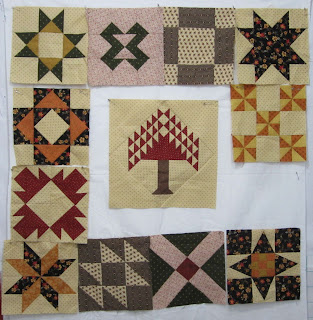 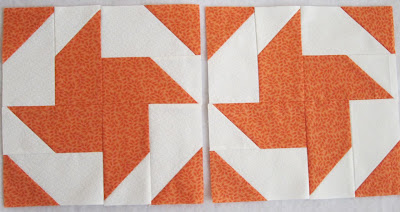 One of the retreaters taught us how to make this block... which produces two blocks at a time.  We all made at least one block and she made them into baby quilts to donate to our normal charity. 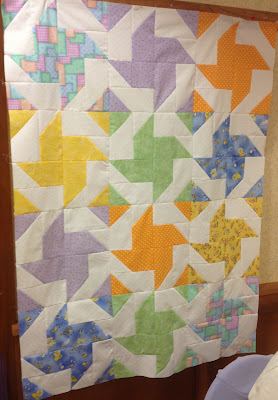 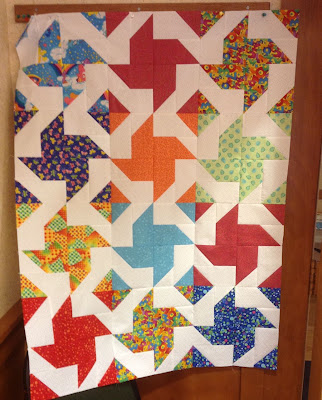 And here is one with bright fabrics.  I believe we had enough blocks to make 3 baby quilts.  Really a fun, easy block.  If you want more inspiration go to Patchwork Times to visit design walls across the internet.

On to my weekly goals:


Week of October 8
Play with Sophia and Natalie√ great fun!
Return home safely√
Make the next 1800 BOM, write directions√ look for my blog post later this week
Quilt charity baby quilt
Get all my supplies back into the studio√
Work on Scrap Squad #5√

I'm not putting a whole lot on the list this week. I may pull out a UFO to use as a leader ender while working on Scrap Squad #5.  I like what I've done with it so far.