Retreat weekend is over.  It was great fun and I was able to make progress on several quilts, most UFOs.   Here's the run down. 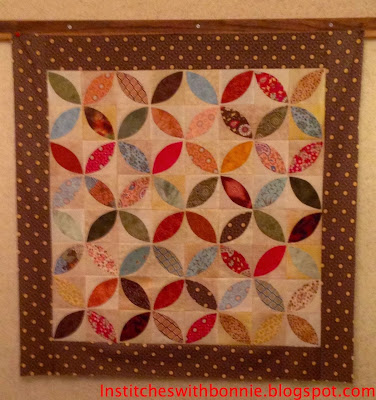 I finished the top of the orange peel quilt.  The border isn't dots -- there's more print around those dots.  This picture was taken in the evening so it isn't crisp. My quilting plan is to stipple between the peels.  Someone suggested trapunto for the peels.  Hum, not so sure about that.  Probably this will be done on Bubbles, instead of Ruthie. 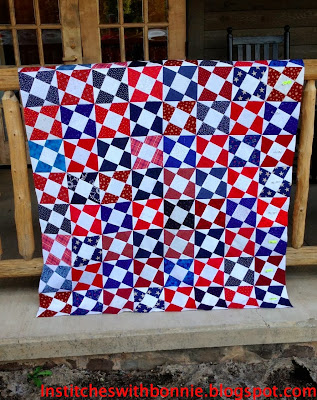 I was tickled to get this to the center top stage.  I received these blocks from the FCQ EQuilters two (three?) years ago.  I had to make several to go with to get what I thought was a big enough quilt for Quilts of Valor.  These start out as regular 9 patches and then using the X-Block ruler you cut them wonky.  I may make enough blocks for a row or two more.  Then I'll need to find a border and backing.  It's moving along.

I also worked on blocks for the black, white and red wonky log cabin. And, the brights and white 4 patch.  I don't think I've talked much about that quilt.  I gave a demo to the guild about making quick 4 patches.  When I was getting ready for it I decided it made a whole lot of sense to actually make blocks that I could put into a baby quilt.  Now, I'm trying to get the quilt together so I can finish it off.  It won't take long. I'll probably use it as an ender for the shaded 9 patch.  I want it together before the grands come this weekend.

I guess last week I was very realistic on my goals.  I got most everything done.  I don't know how well I'll do this week.  I need a little down time from sewing so much over the weekend.

Week of September 30, 2013
Finish secret project to take on retreat√
Make another secret project√
Figure out what to bring on retreat to work on√
Go to Patchwork Plus and RETREAT! √
Start and maybe finish a couple of projects using blocks from the two block groups I am in √ one together
Work on black and white log cabin √
Attend Aimee’s baby shower √

Week of October 7, 2013
Sew the shaded 9 patch together
Clean the studio
Sew the bright and white 4 patch together
Clean downstairs
Find backing and load baby quilt from the June retreat.
Make breakfast treats for guild
Read a book
Have fun with Sophia, Natalie, Jennie and Brian when they visit

Since it's Monday make sure you visit Patchwork Times so you can visit lots of Design Wall Mondays.

I'll be cleaning, sewing and a bit of lazing around this week.
Happy Quilting All.