Wow!  Retreat was great, wet, and cold but a fabulous time was had by all!

The drive up was uneventful with light mist falling.   The weather rapidly deteriorated to rain for the next 3 days. Ugh.  Luckily most of the time the rain was light, at least when we had to go down for meals.  We got a bit wet but we dried off pretty well. And the best part was I wasn't even aware of the rain except at meal times -- too busy sewing and talking and laughing.

Dorothy and I got to the retreat location by 1.  I was sewing by 2:30 or so.  Although I don't really see great progress on what I brought to work on, I know I did make progress.

The first thing I did was quilt The Grim Reaper that I had made last year.  Easy diagonal lines finished it off.  A cute black and white check binding was added. Voila‘ and I have a little finish.  It will be hanging in the hallway little quilt gallery on the way to my studio. 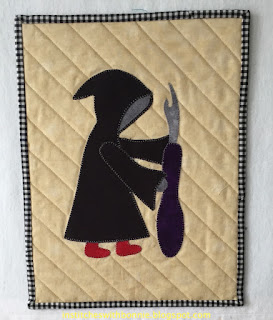 I got 7 blocks of Easy Street finished. (That is downright depressing since that was my main activity.)  The center "9 patches" were already together.  You have to be careful with these blocks so you don't get any units turned around.  I learned that there really isn't enough room to spread out a block like this so it can be easily sewn together.  Next time, I'll bring something easier to work on. 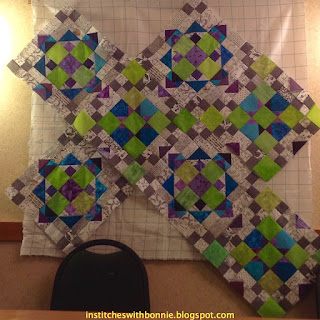 I made several blocks that Sharon is taking up to Faithful Circle for their bom lottery and block of the quarter drawing. The dresden is for the quarterly drawing as it used the special ruler, as requested. Of the four block of the month entries, the top right one came out way darker than reality. (The top two were Sharon's ad the bottom two were mine.) I pilfered fabric from Easy Street box.  That is a really easy block and looks like it will be fun to play with the layout. 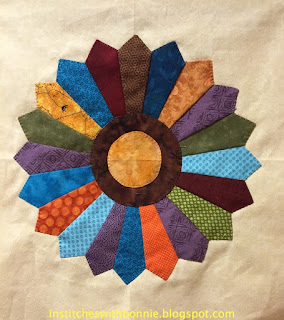 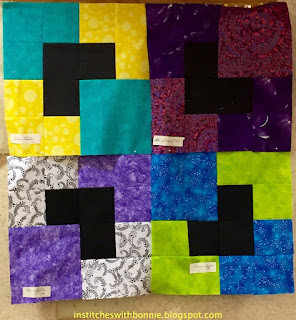 I also finished the table runner that I donated for a silent auction that is a fund raiser.  Every year FCQ holds an auction where all proceeds go to outreach at the church where they meet.  In one night they raise a couple of thousand dollars from what I remember.  Great Job Ladies!  Even though I can't be there to make some purchases, I can certainly send something up to auction off! 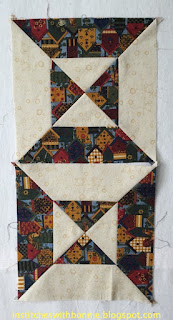 We had several nifty demonstrations during the weekend.  First was this double quarter square triangle block.  WAY cool and very easy to do.  I may play around with this and see what other blocks can be made this way.

We also learned how to make a star pot holder.  I got almost finished but decided not to fuss with the binding ending until I got home and could concentrate on it.  Again, I "stole" the fabrics from my East Street quilt. It's the second from the right on the bottom in turquoise and lime green. 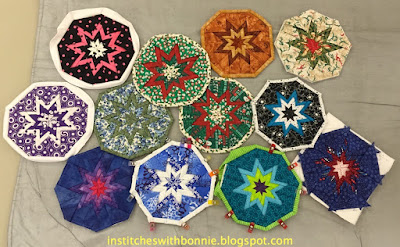 I decided not to make placemats that were demonstrated because I wanted to use a fabric that matched the dining room/dishes better. (Hey, turquoise flowered placemats wouldn't look great with burgundy dishes!) 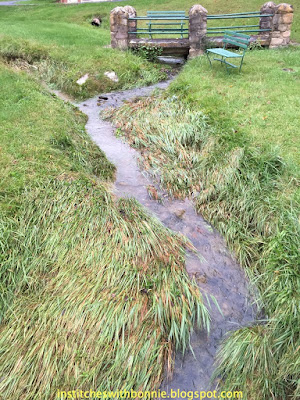 My last project was sewing the center of a zig zag top for a nursing home quilt.  I will be putting 2 borders on it -- one thin one and then a slightly larger one of the bird house fabric. I'll share pictures of it after I get the borders on.

Here's an idea of the amount of rain we had while we were up in Massanetta. (I incorrectly called it Massannutten last week.  That's a ski resort.)  Here are pictures of the small stream we crossed going to meals every day.  By the last night it had definitely swollen out of its banks a bit. It was odd that the water coming from the right was very mud filled and the water from the left was clear.   Driving home the James River was higher than I've ever seen it.  Didn't want to linger on that bridge! 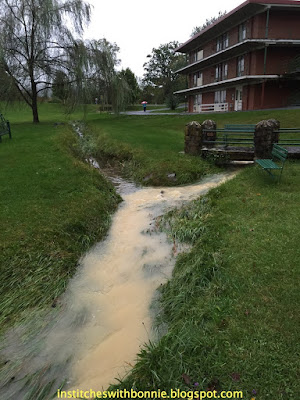 That's my report this week.  Here's how I did on my goals.


Week of September 28, 2015
Quilt and bind teddy bear top√ need to do the last section of binding
Quilt top for Jenny √
Bind table runner √
Organize supplies for retreat√
Attend and have lots of fun at retreat√√√!!

We'll be checking up on the beach house. I don't plan to do any sewing until we get home. And, rats, it will take me a day to get everything put away from the retreat.  I hope to get some counted cross stitch and some knitting done down at the beach.

Check out Monday Making to see what is going on at blogs across the internet. (I'll try to post to some more linky parties later today.)