Monday went zooming by -- I never even thought about posting my normal Monday post.  We are down at the beach house with friends from college.  Bob and Pat rowed for University of Southern California together.  When Bob married Barb it turned out that we all became great friends. We go for too many years without seeing each other but we pick up our friendship without missing a beat.

Here we are after finishing a great meal at Blue Moon Brewery in Manteo, NC.  We had spent the morning at the Fort Raleigh National Park on Roanoke Island.  This was the site of the first European settlement in America.  If you remember Walter Raleigh and Queen Elizabeth I, and the Lost Colony form American history, Fort Raleigh is where it took place.  Walter Raleigh organized the trip from England with the approval of Elizabeth I, the Virgin queen.  Raleigh was hoping to start a settlement of English and gather resources and wealth from the land. That's not what happened.  The governor of the land went back to England and couldn't get back to Roanoke Island for 3 years.  All English ships were being used to fight the Spanish Armada. Not good for the settlers.  They were gone when Governor White was able to return.  It's still a mystery of what happened to them, including the White's granddaughter who was the first European child born in the New World. 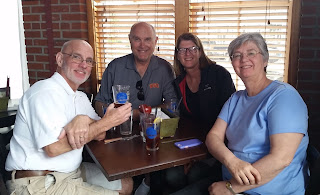 Monday we spent exploring lighthouses in Cape Hatteras National Seashore.   I wasn't willing to go up the first one -- I'm slightly claustrophobic and the whole idea freaked me out. At the second lighthouse I decided to give it a try with everyone else. I got up two flights of spiral steps but -- nope -- not for me!  I've included a picture of the Bodie (pronounced like body) Light Station. Despite me chickening out we all had a great time.  (You should be able to click on the photos to see a larger pic.) 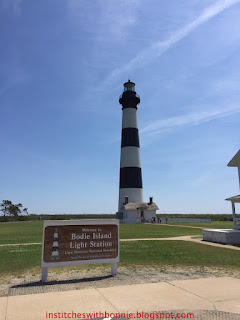 Bob and Barb go back to California tomorrow and we're headed home.  I leave the next day for Sharon's in MD and then on to retreat on Friday.  I have a little bit more cutting to do for the two main projects I'm bringing with me to work on.  And, of course, I need to clear out the suitcase and refill it with clean clothes.  I'll probably have less than 20 hour turn around.

Here's Dorothy's quilt that I finished quilting last week.  She was happy to pick it up last Friday. The fabrics were so busy you really couldn't see the quilting, even close up.  It is a beautiful quilt -- I always like blue and yellow quilts. 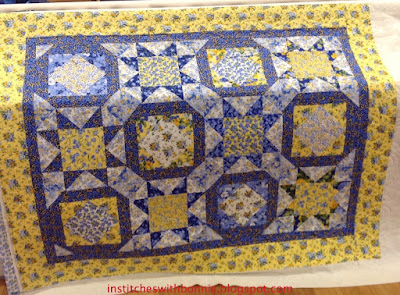 Here are my goals from last week.  Most got done.
May 9, 2016
Quilt customer quilt√
Finish piecing CP orphan blocks √ only 1 seam left
Cut two quilt kits to sew up at retreat √ need to add some units to these
Make samples for flippy star presentation√

And this week:
May 16, 2016
View a couple of lighthouses in the Outer Banks of NC
Enjoy fun times and good food with Bob and Barb
Add a few pieces to each kit
Enjoy the FCQ retreat in Maryland
Sew like a fiend and get whatever I can done!

Today I'm linking up with Monday Makings, Main Crush Monday, Freemotion by the River. Grab a cup of joe and surf the internet a bit to see what's happening with quilty blogs!