I was very productive at the Sit and Stitch on Friday.  All of the border pieces were done but the corners are a real bugaboo. Here's what the pineapple looks like this morning. 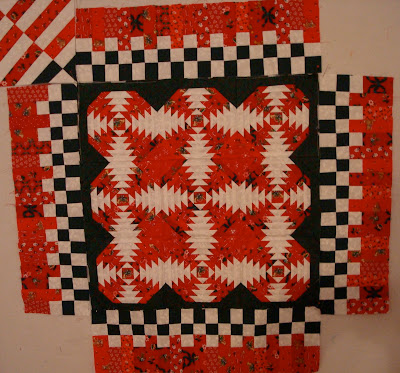 I planned out this corner while at the S&S.  But when I put it together Saturday -- um, don't like that all that much. Original plan is in the above picture.  While taking pictures this morning I tried a few alternatives: 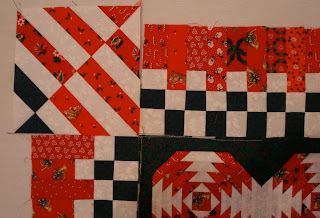 Turned it. Maybe I should have turned this once more the red and white corner is against the green and white part. Will try later when I am upstairs.
Then I thought I could make some sort of half a log cabin block and attempted to do it with some small pieces of the red fabrics.  One of the problems is the border pieces are an even number so they will end the same way every time. Start with a green, end with a white.  At least I think that is the problem.  I rather like the log cabin idea all though I am going to see what I can do improve it.  First is I will remove the green and white four patch.  I may also see about changing the last or first of the border pieces.  Perhaps I can have the greens end and begin in two corners and the whites end and begin in the other two corners.  There is going to be some unsewing happening in my life today. Go check out what's on other's design walls by visiting Judy's blog. 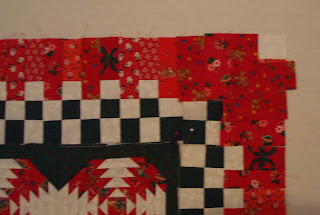 What a shock it was to wake up and look out the window today. 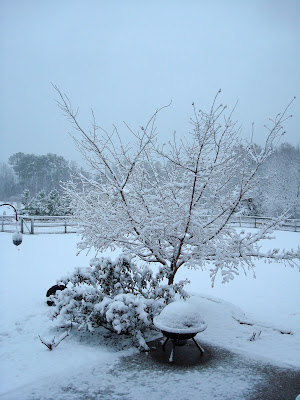 Who said it was going to snow?  I know I wasn't paying a whole lot of attention to the news/weather report last night but you would think I would have heard the "snow" word. 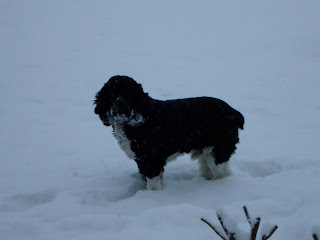 And then there's Raggs.  Shoot -- we must have gotten 3" of snow or so as measured on his leg!  And, I think it is still snowing.
Lots to do today.  Happy Quilting All!