Finally a finished quilt!  It's been a secret since Jenny and I started it.  As you may remember Theodore Everett joined my son's family on October 19th.  Since my daughter Jenny is also a quilter we decided (again) to do a joint quilt.  I quizzed DIL Aimee about colors and style for the nursery and came up with Elizabeth Hartman's pattern Fancy Forest.  Aimee wanted foxes so Fancy Forest was perfect.  Yes, I could have picked her fox pattern but I also thought I might want to try some of her other designs in the forest. 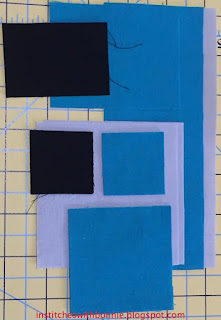 My first fox attempt.  There is a lot of cutting with this pattern because, duh, there are a lot of pieces in each fox.  However, after the first practice block which came out perfectly, the background, eyes, nose and cheeks could all be cut at the same time. (Hum, I don't see any cheeks to the left there... And, was the color that different or is this a different block shown?) We decided on a light gray background.  Jenny made a couple of foxes with the dark gray. 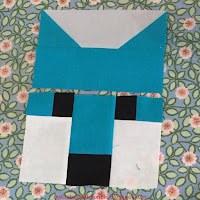 We thought we might not use them but as we were laying them out they looked great in with all the others. Gave it a modern look.  Who knew?

And now, six foxes.  Jenny was making foxes at her house during the nights and weekends.

Now that we live "a day trip away" Jenny and family came down for a visit and she and I were able to put the quilt together from our two sets of blocks.  Somehow we both had blocks made from the same fabric. See Mr. Fox on the bottom left?  His navy blue fabric has thin dark black lines through it.  We had a funny conversation claiming the blocks were ours.  But I had this picture to prove I had also made one.  Hum, usually our fabric tastes are different but we both liked this one!

Our color information from Aimee was grey, rust, navy blue and turquoise.  I found the grey background fabric and sent some to Jenny.  We used our stashes to make the blocks.

Once the blocks were together we weren't sure it really needed a border.  But I insisted we audition some fabric from my stash.  We loved the turquoise inner border.  Then the navy blue went so well with it and the rest of the quilt.  Honestly, there was so little of each fabric left we had to make the border width dependent on how much fabric we had on hand.  And, I had to make sure I didn't cut it wrong or it would have meant a trip to a store.  I think the navy blue border ended up being 3 1/4" wide with almost nothing left! Jenny sewed while I ironed and cut sashing, borders, whatever was needed. 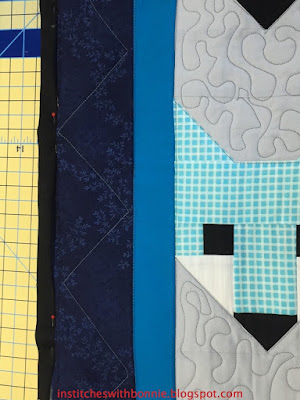 I forgot that I sent Jenny several pictures to help pick out the binding.  This was a dark blue fabric that was turned down.  We both liked a turquoise fabric with quarter-sized white polka dots on it.  (In fact the turquoise was just about this fox's color.)


I stitched in the ditch around each fox and between the turquoise and the navy borders.  I stippled in the gray. I really didn't want to quilt over the foxes' faces. Then I did angles in the blue border.  In the middle of finishing the quilt we were at Kevin's house taking care of Ellie while mom and dad were having her little brother.  So it was delayed a bit. 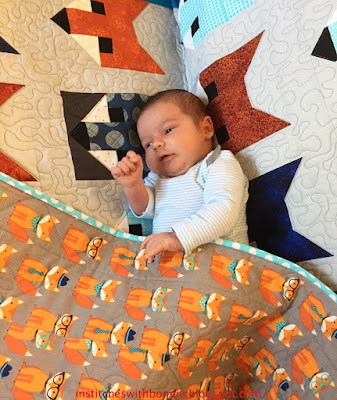 Theo gave a thumbs up on his new quilt when we gave it to him on Saturday.  (Mommy and Daddy liked it too!) I was tickled to find this cute fox fabric that really went with the front.  Theo's almost a month old now.  Yea for a great finish! This is the first some-what large quilt I've finished (well Jen and I) almost the whole year.

On to the goals. I've been busy in the studio this past week and got most of my goals done.

Oct 10, 2016
Finish binding on secret quilt√
Knit on burgundy sock√
Sew flower quilt together√ made progress but not together yet
Embroider more shirts and onesies√
Make one more Christmas Favorites block√ started

And for this week:

Oct 17, 2016
Finish the last embroidery on the corners of the flower quilt
Embroider the last two Halloween shirts

I'm linking up with Monday Making at Love Laugh Quilt and Main Crush Monday at Cooking Up Quilts. Hopefully we'll all take some time to visit some of the links to see what is going on around the online quilting world this week. My weeks seemed to be chalk full of stuff but darned if I know what!