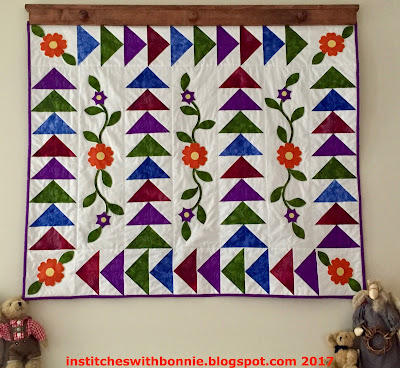 This pattern is from the Accuquilt website.  The pattern download is free.  I started it in May, 2016 that I blogged about here. I've been working on it off and on since then.  The top was done at the end of October, 2016 but I was waiting for ideas to quilt it.  I actually bought two different designs for the long arm.  The first one I would have been placing an individual design into each goose. EEK -- lots of work and a whole lot of threads to be tied off and buried.  Then, I found a great design that would work on a whole line of geese like I had.  It took me a while to get the sizes right on the computer but in the end it worked great. Next I quilted in the ditch around each of the major sections.  Last, I moved to the Bernina to stitch around all of the flowers and leaves. 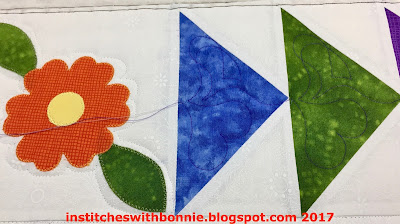 I used the same purple in the flying geese as the binding. It's so nice to check items off my goal lists. √ 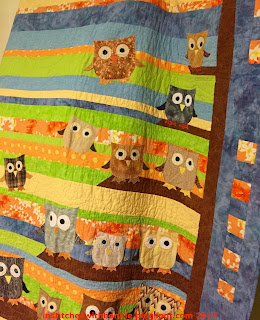 I was up in Maryland on grammy duty for part of this week.  I don't often see quilts I've given away after they've been used for awhile but this one was hanging on a display ladder.  I made this one for Natalie 5 years ago.  At the time I was a member of Quiltmaker's Scrap Squad.  We were encouraged to take a design and make it ours.  The original of this was a red, white and blue quilt with stars on it.  I used the colors of the nursery and added owls. You can't quite see it but I also added a counting element: first branch there was 1 owl, 2 on the next and so forth to five owls.  I really enjoyed making this quilt. 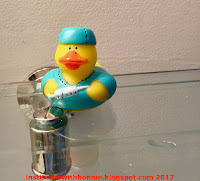 This is for Nancy who blogs at Wyoming Breezes. (On August 28th, Nancy posted about some other little ducks she found in her neighborhood.)  Here's a little nurse duck I found on the bathroom shelf at my daughter's house.  It was wet so I suspect it goes into the bathtub to be played with.  I'll eventually share all of mine that I was given by a student when I was teaching.

I haven't had a chance to get back to the studio since before I left earlier this week but I'm looking forward to spending most of tomorrow sewing to my heart's content.

I'm linking up with the following linky parties: Can I Get a Whoop Whoop?, Needle and Thread Thursday, and Finished or Not Friday. Take some time to look around at the various links.  They really will motivate you!

That's it for me today!  I'm off to make a salad to take to a pot luck tonight.

Happy Quilting All! Bonnie
Posted by Bonnie at 2:49 PM