Did you have a great 4 of July?  We used to enjoy taking our kids to firework shows when we lived in Columbia, Maryland.  Now we sometimes check from our back deck to see if we can see any of the local fireworks.  This year it was so hot and humid that we enjoyed the Capitol Fourth on PBS. Nice air conditioning, no humidity or rain. 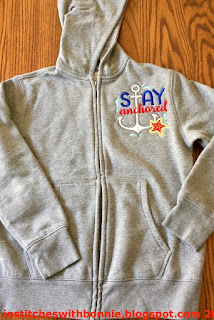 I've spent quite a few days down in the studio this week.  By Friday afternoon I knew I needed to recheck my goals list because I had wandered away from what I really wanted to get done. 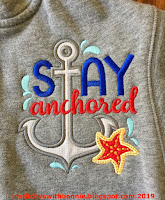 I finished the last of the grand's coverups/sweatshirts.  Sophie chose this cute seaside saying from Designs by Juju.  It is from Beach Word Art 5 set.  It stitched out beautifully.  I bought the large magnetic hoop to go with my  new Viking.  It is so easy to use it -- especially on this sweatshirt.  This week I did get some more magnets so I can attach items with 8 magnets rather than just 4.  It's time to mail the girls their new beach coverup/sweatshirt. 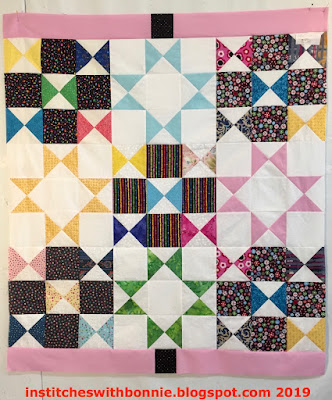 Do you remember this suggested quilt top?  (I'll wait, unless you remember it from last Monday...)  I really wanted to get it to finished top stage so here it is.  I didn't like the hot pink with the blocks I had been given so I tried something else.  Ohio Star blocks. Or at least kind of like an Ohio Star block.  The blocks are 12" finished.  The top will eventually go to a nursing home that likes 36" wide quilts by no more than 42" tall.  I think these quilts need to be longer than 36" so I added the pink strips top and bottom to make it a bit longer.  The odd width is because that was all the pink I had left.  I took apart an extra block to put the multicolor dots on black in the center of the borders.  I've found a piece of backing but it isn't quite wide enough.  So I will be taking the other 7 units from the extra block and adding more quarter square triangle units to make the backing wide enough.  (I don't really like making involved pieced backs but it makes some sense this time since I have several units done already.)  Hopefully, I'll get the backing done in the next couple of weeks and then get it finished up.

And here's one last block I tried before I cut out a whole quilt. The pattern is Flower Song by Cozy Quilt Company.  It's designed to use 2.5" strips and their Strip Tube Ruler.  If you don't have their ruler they give easy directions to cut the half square triangles by marking a diagonal on a square ruler. I have a partial jelly roll that I think will look great in this block.  I'll be kitting this one up for the October retreat.  Lots of pieces to be cut and sewn but I liked the design.  (Hey, and I'm actually using one of the many patterns I've bought!) 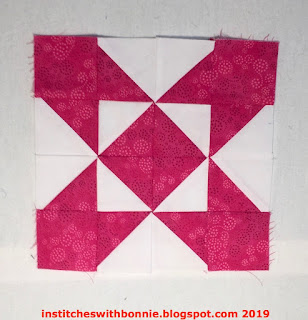 It wasn't the best week for my goals although I got quite a few of them done.  All of the Four Patch variation blocks for the Taps quilt are done.  I started another small charity quilt using the Sawtooth Star block and some stash fabric that was not on my goal list.   Overall I'm not unhappy with what I did get done.
July 1, 2019


Hand quilt on old Christmas quilt√
Make last two Ohio star variation blocks and sew top together√
Continue working on patriotic Four Patch variation (Taps quilt)√
Finish rest of blue Rainbow Scrap blocks√ I may make 1 more …
Start doll sweater(s) didn’t even think about this one…
Possibly start sewing moose blocks I put the blocks up on the design wall but that was it.

I'm done with this blog except to remind you to go visit my favorite linky parties:  Oh Scrap, Monday Making, Main Crush Monday, Moving It Forward and What I Made Monday.  If it's not linked yet the blog hasn't been posted yet.  I'll check back and add the links√. (I know, amazing that I remembered to do it first thing this am!)