I have worked most of this week on my blue table runner for the Table Scraps Challenge.  Those participating are making table runners, placemats, or even mug rugs using the Rainbow Scrap Challenge color of the month.  I've added my own challenge to several of my projects.  This month I decided I would use one of the Accuquilt Appliqué dies I own.  (I own 5 or so but have really only used 1 of them.)  I started out this week getting the embroidery done on three squares of Kona white fabric.  I chose to use Go! Sea Life Medley die.  I also have the free embroidery files for this die. So I set up the embroidery module and got to work.

I actually embroidered the crab first. Um, I guess it wasn't such a brilliant idea to use the variegated thread.  And, apparently it weighs differently than my usual embroidery thread as there was a lot of white bobbin thread showing on the top.  It took about an hour to do so I wasn't that interested in redoing it. The other two designs I used a thread that went with the fabric used and were done in way less than an hour. 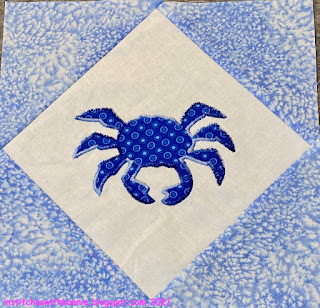 I added rectangles to the designs to make a square in a square block. I used RK Quilting Calc app on my iPad.  It's an older program but it works just fine.  I needed the dimensions to cut the inner squares and the outer triangles so that I would have 9" finished blocks.  It worked like a charm.  And, I could email the end results to my phone so I would have the measurements when I started to cut the fabric.
Next up was deciding on some sort of border.  I was looking at my Go 9" Cube and realized there was a nice rectangle in it: 2.75" by 4.5."  That would do great.  I grabbed a bunch of different blues (excluding any that looked greyed.)  I didn't check to see if the die would work with the blocks but I figured they should since they were part of the 9" cube.  I was surprised that I couldn't cut a different fabric for each rectangle but apparently I have a LOT of greyed blues.  No matter two or three of each color worked just fine. 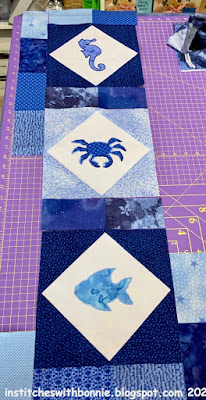 Yep, it is difficult to get a picture of a long skinny runner. I definitely liked how it was coming together.  After the border was sewn together and on it was time to make the sandwich. Since I was going to quilt this on my domestic machine I used a red Frixion to mark the center of the design before I embroidered it.  Except, I also used a spray adhesive to hold the pieces of the sandwich together. Oops!  The cold adhesive caused the Friction ink to reappear.  A shot with the hot iron took care of it. 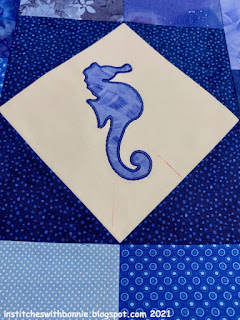 On to quilting the runner. I stitched in the ditch around the white squares and also around the dark blue squares.  I carefully stitched around each appliqué.  Then I whipped out my blue tape and marked some straight line quilting on the borders and the rectangles between the designs.  I carefully marked a 1/4" from the outside edge so the quilting lines didn't get lost in the binding.  Several times I counted the rectangles to see if I had the right number so my design would come out evenly.  I was quilting diagonally from block to block going up and down.  Think of it as points \/\/\/\/ but stretched out for the length of the rectangle. Luckily it did come out just right. 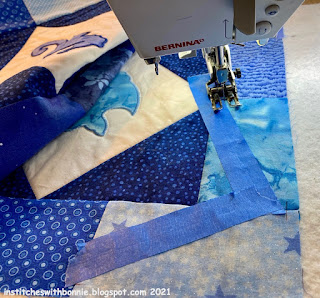 I had carefully planned out how much I would need to get done each day this week so I could post this blog on Friday evening.  This morning I was still finishing the quilting.  I sewed the binding on while FaceTiming with my friend Sharon.  I only got half of the binding hand sewn before my hands gave out.  Sorry, yes, there are some Wonder Clips on this "finished" picture.  I'll get the rest done tomorrow. 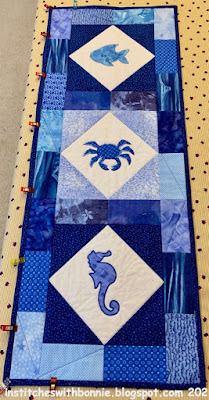 You might have noticed that I've placed all of the fish going in one direction. Although this could actually be used as a table runner, I'm going to use it as a wall hanging either in our home or in our beach house in Nags Head.  Look at the cute holder I have to put it on. 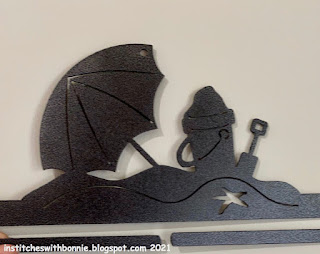 I still have more work to do on this table runner, wall hanging. I'll be sewing a hanging sleeve on it so I can easily put it on this hanger.  I'm also thinking of putting some buttons or beads for eyes for the crab, fish, and sea horse.
It's time to link up with several great linky parties.  Join the fun and do a little Internet surfing this weekend. I'm linking to Midweek Makers, Needle and Thread Thursday, Can I Get a Whoop, Whoop?, Finished or Not Friday, Beauties Pageant, Scrap Happy Saturday, and Table Scraps Runner/Topper Challenge Linky Party. Phew, that is a long list this week.  I know I'm going to love seeing what folks are working on. (Don't we all need new ideas?)
That's it for me today.  I hope to see you on Monday for Monday Meanderings.
Happy Quilting All! Bonnie