I was in Maryland for the Friday Night Sew-In. And, I forgot all about it. But, never fear I did get some sewing done on Friday so I'm counting that instead of Friday night! As my reader's know, my kids sabotaged my fabric usage during the month of December, and, as it turns out, the whole year. Kevin gave me a nice tote bag kit from Connecting Threads. I was determined to get it made right away so I could use up the 2 3/4 yards of fabric in it. Well, truth be told I got a good start on it but I was making dinner that night and Saturday so I had to split my time between that and sewing. So, I've got the two handles done and the body of the tote with the pockets. Next I need to quilt it and make up the lining and bottom. (I think...) Monday I hope to finish it. I'm planning on using it to hold current knitting projects or to carry stuff to quilt groups. Hum, decisions, decisions. 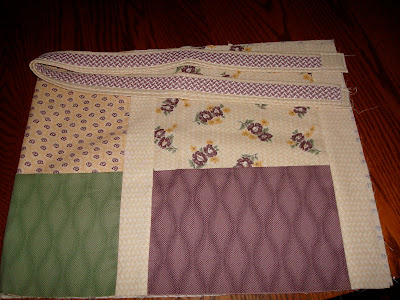 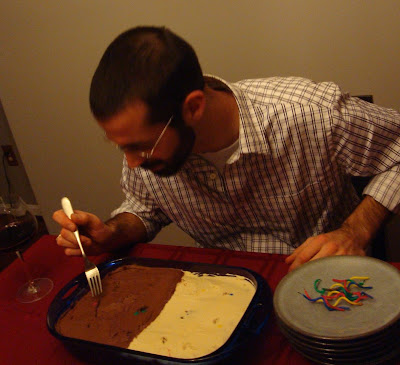 One of the reasons we were in Maryland was to celebrate Kevin's birthday. (a week late but at least in the same month!) I got creative with his birthday cake. He couldn't decide whether he wanted chocolate or vanilla. So I decided to do a chocolate marble cake. No problem, buy the marble cake mix and get on with it. Except the grocery store didn't have marble cake mix. No problem, I can fake it. Which I did but turned out just a little drier than it should have been. And, then to get really creative, I made chocolate and vanilla frosting. I was going to make squares or circles (think quilt here) but decided it would be much easier to just do half and half.
And, Saturday afternoon Aimee 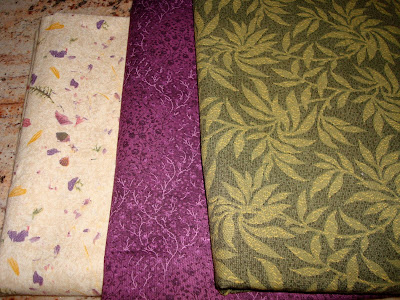 and I went off to Capital Quilts. I was looking for a fabric to go with the light print and the green. These are going to be used Friday for another Mystery for Relay mystery quilt. I am so excited. I've had the light for, um, er, 10 - 13 years or so. I really like it but haven't had any great ideas for it. I was thrilled when it was more than enough to make the next mystery quilt. And, I found the green in the stash too. But nothing else went with it so I was really looking forward to shopping for new fabric. Yeah. Capital Quilts had several pieces that went nicely but I decided on this one. Look for pictures of this later this week.
We're back home after a long drive home in the rain. I was cold nearly the whole trip for some reason. But now I am toasty warm sitting by the fire! I'm going to read a novel for a while and then maybe knit some. Tomorrow -- clear the decks, I'm sewing again!
Happy Quilting All!