This past week flew by.  Really, I saw the wings on the clock! 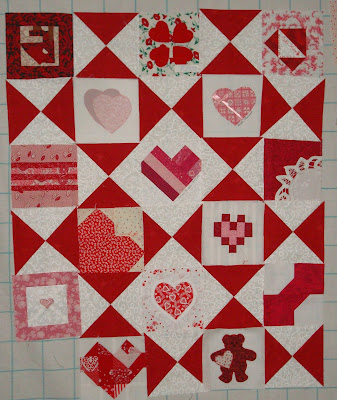 Here's the design wall as I left it on Wednesday before I went to Maryland.
These are blocks from an Internet swap from 1992 or 3.  I added the hour glass blocks on Tuesday.  Needless to say I think they really make this top sing. I thought I had posted about this before but I couldn't find a picture.  Brian was very impressed that I was on the internet in 1992 or 3.  We had a dial up connection so your phone was busy when you were on the Internet. We connected through Prodigy which had a very active group of quilters.
Remember when I showed the Tucker Trimmer tool for making quarter triangles, aka, hour glass blocks?  It dawned on me it would work wonderfully on larger blocks.  These are 4" finished blocks. They haven't been sewn together yet but you certainly can get the idea of how they will look.  I need to make one more block.  (They come in pairs so, I'll have an extra one for the back too.) Don't forget to visit Patchwork Times to see what is on other design walls today. 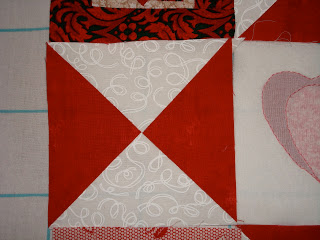 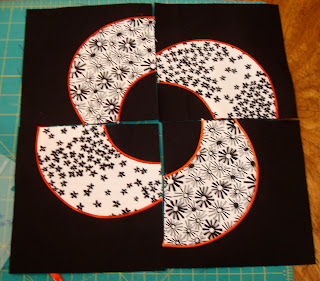 Here are the 4 blocks Sharon and I made from the class with Susan Cleveland.  I really like how they look.  So at least another 7 are planned.  But, don't hold your breath on when they will get done! 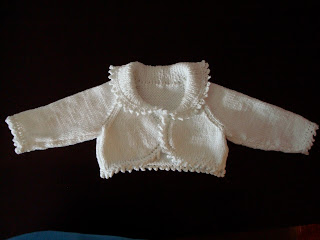 This is the shrug I made for Sophie.  It's a bit big on her but that is better than being too small.  It was a bear to get the collar right as I don't think I followed the directions correctly -- or they are written incorrectly.  I just rewrote them the best that I could.  And, voila, cute shrug with collar and little trim.  The hardest part of the whole thing was the trim and, honestly it wasn't that bad.  The pattern is sized all the way to a 7.  So, Sophie, you may get another one some day.


CUTE BABY ALERT -- yea, I visited Jenny, Brian and Sophia this weekend -- at least for a short time.  Saturday I stayed with Sophie so Jen and Brian could get out for some couple time.  We had a mini photo session so I could have new pictures of Sophie. (Note to self, print a picture so you have one in your wallet when folks ask to see her!) Her personality is beginning to shine.  She does enjoy laughing but she tends to be a pretty serious little girl.  And, man, she hates to take naps.  Sunday morning I watched her while they went to the grocery store.  Soph was suppose to nap.  Ha, she was crying like crazy.  So we had some calm times talking, playing with toys and another nap attempt.  Nope, not interested even though she was yawning and rubbing her eyes.  Bottle, nope, not going to nap.  Luckily the kids came home and rescued me.  I think Sophia was going to be bundled up for a nice walk in her stroller.  And, I know she'd go to sleep then. She turns 6 months this week. Note to Jenny -- see, I said I visited all of you not just Sophia. 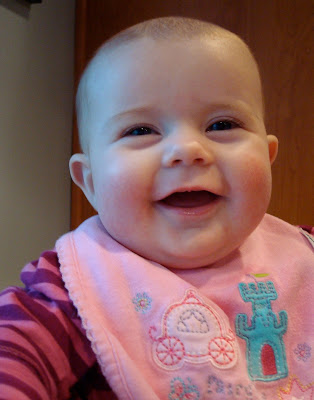 I'll have to post plans and last week successes (or failures) later.  I have no idea where I am on my projects and what I want to work on.
Thanks for visiting and Happy Quilting All.