Very little quilting is getting done around here but I am hoping to do better over this coming week.  Here's what I have been doing instead of quilting...


Our friends Bob and Barb came back to our house after the wedding.  It was great spending time with them again.  California is a long way away.  But, don't worry, we won't be moving there again.  Monday we went to the American Civil War Center at Historic Tredegar Iron Works.  I believe the Civil War Center is a new museum and did a great job of providing interactive information about the Civil War.  From there we went downtown to the Museum of the Confederacy and the White House of the Confederacy. 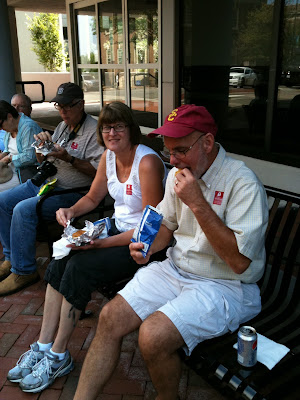 Before we went into it we stopped a street vendor to get lunch.  It was a pretty good lunch and really cheap. We lucked out to find some empty benches.


Then on to the museum. 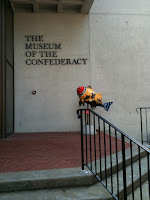 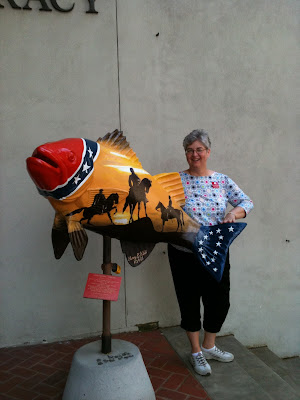 Here I am with a fish painted with several Confederate generals.  It kind of reminds me of Stone Mountain where several Confederate generals on horses are carved into the side of the mountain.  There is a great multimedia show there also.  We used to love to go there when we had out of state visitors. And, no, I have no idea why a painted fish is there.  The museum had quite a collection of items from various soldiers of the Confederacy.  It was chilling to see holes in uniforms knowing that a bullet went through it and most likely caused the death of the man wearing it. 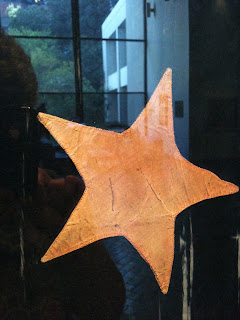 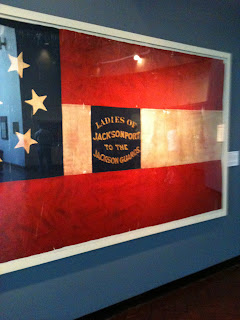 I was fascinated with this flag, one of many at the museum.  What really struck me was these stars were sewn on by machine.  The written part was printed on.  But to see a machine sewn star on this flag blew me away.  There were many such flags on display but I didn't see any others with the machine sewn stars.  Of course, we only had an hour in the museum because we were going to tour the Confederate White House within the hour. The tour was very interesting but we couldn't take pictures within the house. The Davis family had 5 children, if I remember correctly, and only one lived past her 22 birthday.  From what I remember none of the deaths had anything to do with the War.
Enough of being a tourist...I'm on may way to the studio to do a bit of piecing.  Heaven knows I am way behind on several projects that need to be mailed on to others.
Happy Quilting All