Have you ever forgotten all about a project?  As in not in personal memory, not in a UFO list, not in a box marked prominently as to what it is?  If so, you must know exactly how I felt when I was moving stuff around in hopes of getting a few more things packed up for the move to the new studio. 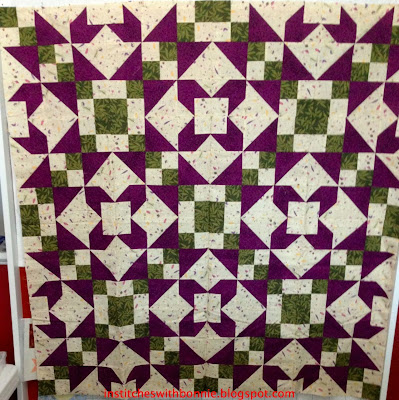 This is mystery #12 from Mysteries for Relay from Marge Gordon. For a $5 donation to the American Cancer Society, Marge creates mysteries on her Yahoo group of the same name. I have been doing her mysteries on and off for years and have to share -- she writes a great mystery.  And, I've finished almost every one I've started.

I have a feeling this might have been the last mystery I did before moving from PA to Va.  Or it is the first one I did here in Va.  It was the bottom quilt of various PHDs, that is projects half done, stored in a plastic box.  All this one needs are borders and then in to the line to be quilted.  There were some other miscellaneous blocks and the beginning of another quilt in there.  Hum, I need to get some things finished one of these days! And, I think all the fabrics came from stash.  Or nearly all, that green and the background fabric were definitely from the stash.  At least I had written a list of what was in the box but this quilt was listed in small letters on the other side of the card I had in there.  Sigh.

Here's what else I've been doing recently. 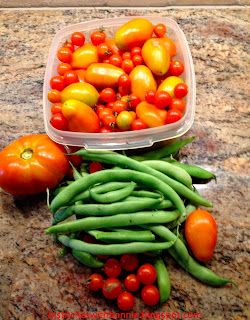 This was yesterday's garden bounty.  We are over run with tomatoes.  We only have three plants - a cherry tomato plant, a roma and a better boy.  And we can't keep up.  We're having tomatoes morning, noon and night. The beans are coming in too and the plants are overshadowed by the tomatoes.  Pat blanches them and freezes them for later eating.

I decided to make some marinara sauce as it called for fresh Romas rather than canned tomatoes.

I had to remove the skins on three pounds of tomatoes before I could make the sauce.  With a little internet help I realized all I needed to do is pop them in boiling water for less than a minute. Plunge them in ice water and peel.  The skins came right off! 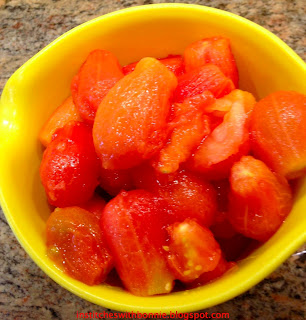 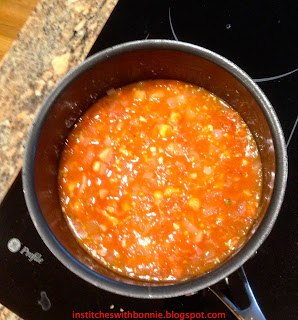 And here's the Marinara sauce ready to be put into containers to go into the freezer.  The question now is what to do with all of the little tomatoes?  We pop them like candy all day long and still have lots left.  And the bushes are still producing.

Do you have any tomato recipes you want to share?  This coming week I'm making a quiche with ham and tomatoes.  I'm open to other ideas.  Maybe it's time for tomato pie again.