At the Beach.  We've been down at the beach house for a few days.  We left an ice event with a bit of snow thrown in back at home.  It's cold and sometimes windy but the sun is out and we're enjoying ourselves.

We actually went to walk the beach yesterday morning.  It was empty so we let the dogs run loose.  Kona stays close by but Raggs is into adventure and goes off sniffing the dunes and piles of sea weed and whatever else strikes his fancy. Unfortunately he doesn't hear very well so we have to stay alert so he doesn't wander too far.  I was bundled up against the wind. 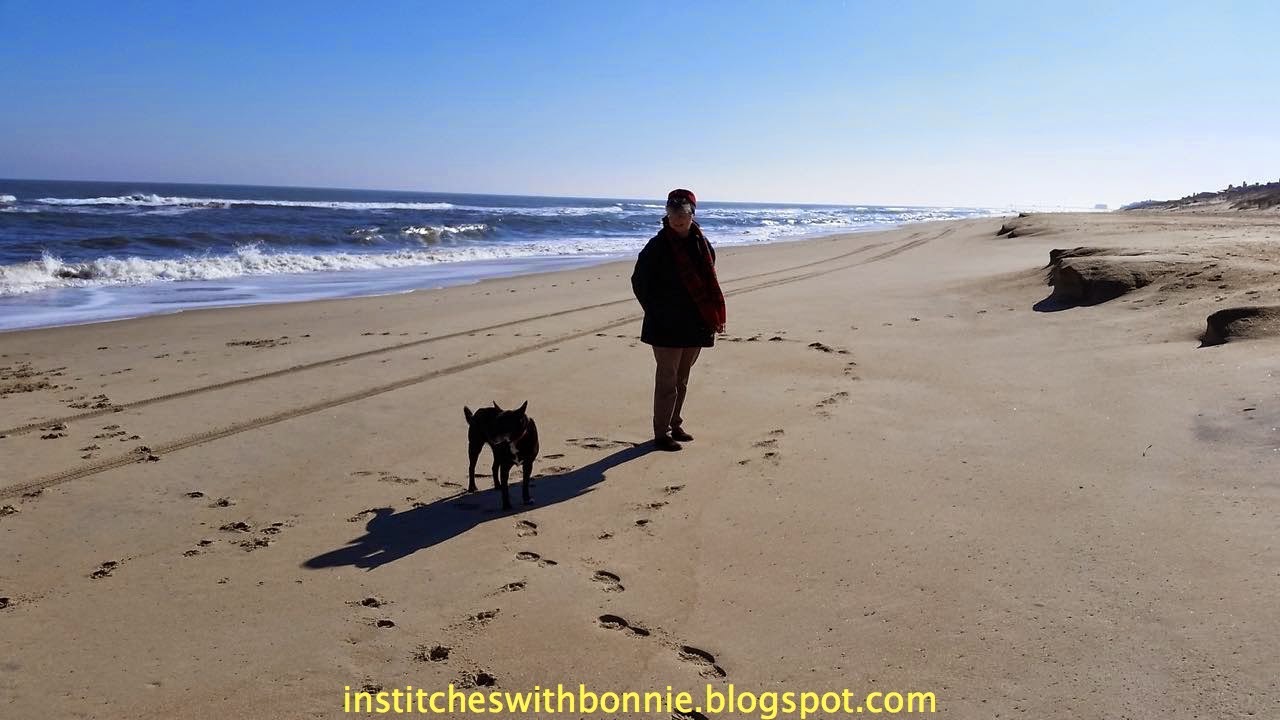 We were surprised to find the stairs down to the beach looking like this! 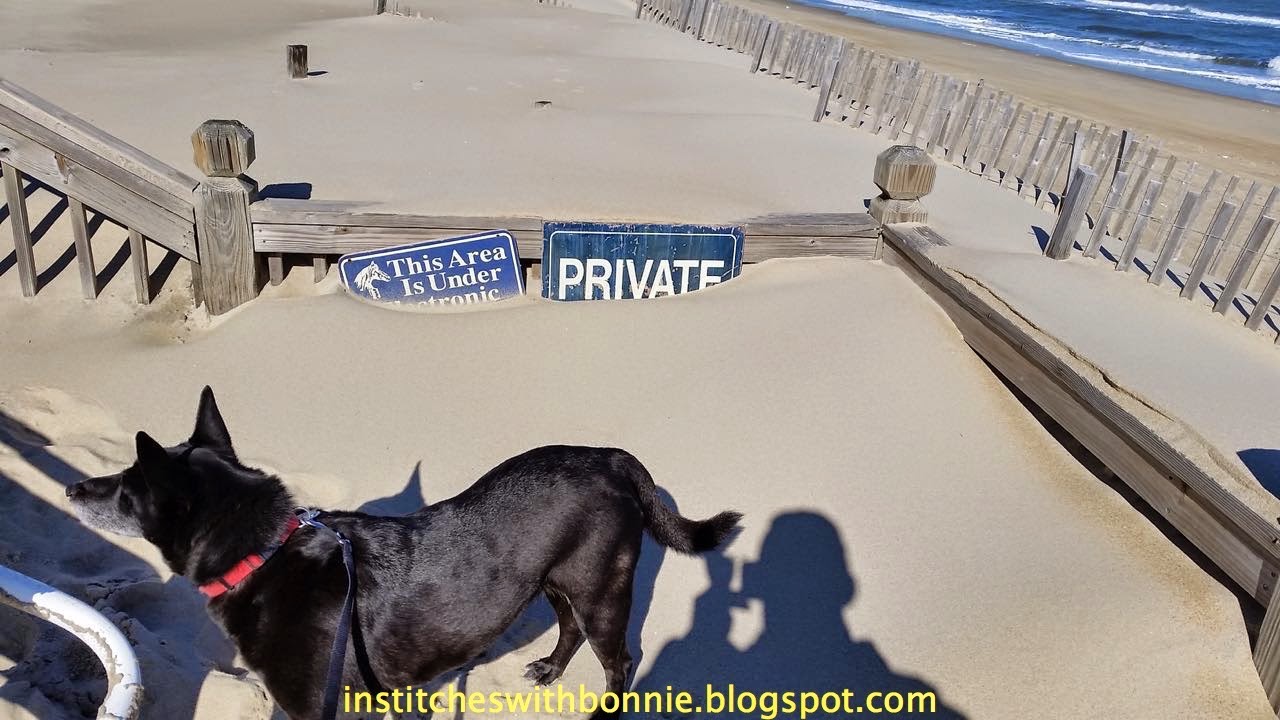 I've been sewing up a storm in my little sewing area by the windows. 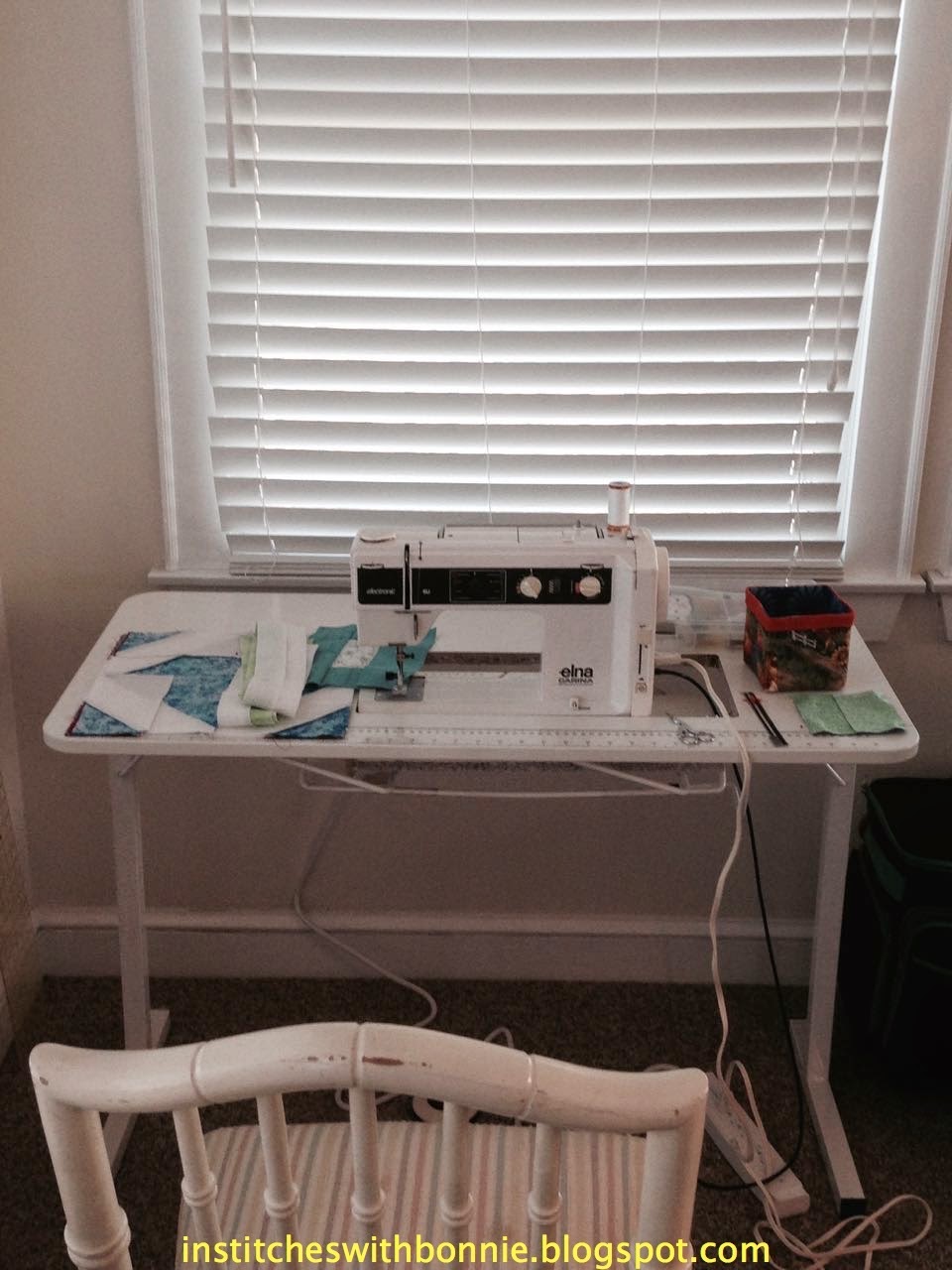 It's in the great room behind the chairs.  The space works really well for me.  I had to close the blinds to get the picture because of the light.  But, I look out over the back yard that is mostly sand and trees and a view of the golf course behind us.

Late afternoon the sun is coming in from the left side and I get the best light for sewing.  I'm blocking the shadows while I sew so I don't even notice them. 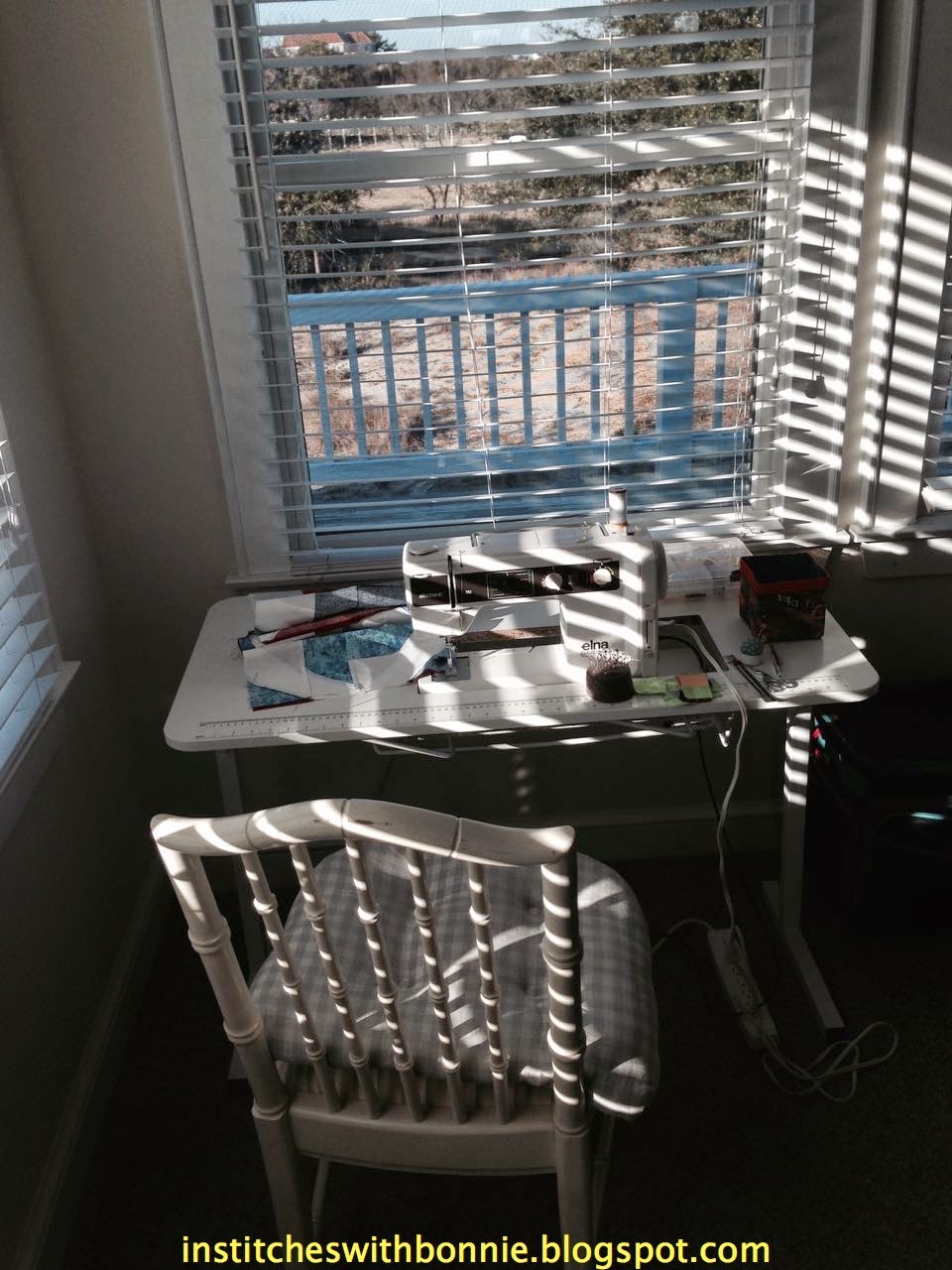 Once the sun starts going down I have to quit sewing.  I brought an Ikea clamp on light but it needs a special plug to allow it to work which didn't make the trip.  Next time I'll make sure I have more lighting.  The table was purchased at JoAnn Fabric stores when it was 50% off and I had a 15 or 20% off everything coupon.  I was leery of it being stable enough but it works great.  I'm using my old Elna Carina that weighs under 20 pounds. It just came back from servicing and is sewing like a champ.

I'm specifically working on three UFO's.  One is for the TAPS collection I mentioned in this post. I've got lots of pinwheel blocks from FCQ Equilters so I thought putting them into quilts was a great idea.  Unfortunately, I didn't check the block sizes before I packed them up.  One is a good 1/2" smaller than the others so it won't work.  Drat!  I've got 4 of the 5 rows done and will swap out the small block for another once I get home.

I'm also working on Wild Dogs -- hopefully I'll get it to top stage.  I finished the appliquéing at fall retreat and they've languished since then.  I cut all the strips and gathered everything I need to finish the top before we head home.  It has pieced sashing and pieced cornerstones so it is taking a time to get it all ready to sew together.

Last, and maybe I won't get to it, is the Mystery of Powhatan quilt. I just looked back to see if I showed any photos of this quilt. It sure doesn't come up as pictures.  I did list it several times in the goals list.  I'll post some pictures of it soon.  It needs either two or three borders to finish it off.  I've cut the strips but they need to be sewn together and put on the quilt.  It may be difficult to do that here as there is limited space to work in.  But I sure would like to get it done.  I'm going fabric shopping on Super Bowl Sunday and I hope to buy a backing for it.  I'll have a big finish the month I get this quilt done -- it's a big queen size quilt.

Ok, time for me to quit perusing the Internet and begin sewing again.  We're going out to lunch and hitting a yarn store.  I find it hard to believe but there is a wonderful yarn store here in the Outer Banks. I've gotten several great patterns and some sock yarn.  It won't be used until several other pairs are done but one of these days I'll get to it.