What an unproductive week!  We had a major snow storm on Monday into Tuesday.  10" of snow in our little county, the most in all of central Virginia.  And, it brought the whole area to a standstill. Generally, after a snowstorm the weather immediately warms up and it all melts. Nope, didn't happen.  Instead we broke low records during the week.  Good gracious, one night it was -3º!  Now, I'm sure some of you northern girls are laughing your heads off and commenting about the -20º you are facing, and worse, but I moved South so I wouldn't have to deal with all that really cold weather.  Bummer!

Schools were canceled for the rest of the week.  Nearly every social event was canceled.  We got out of our drive way on Wed morning to do our normal workout at the Y.  But the roads weren't plowed in our neighborhood so we were cautious. And, the snow didn't melt!  A week later we have snow but at least some of it is melting now.  Thank goodness.  More snow is predicted this weekend and we don't have any sustained time with temps above freezing.  The snow is going to hang around for a while.

Unlike others, snow doesn't make me want to run upstairs and quilt.  I tend to huddle under quilts and read.  But even I was getting sick of reading after a few days.  And, then Saturday we woke up to no electricity.  And, it didn't come back on until dinnertime.  Well that made it really hard to do any quilting.  Boy it got cold in the house -- 54º.  Luckily we were meeting a friend for lunch so we really only had half a day with no electricity.  The only good news was by Sunday afternoon I was ready for some quilting time.

Last week I picked a new UFO to work on and I've been diligently adding to my black and white log cabin blocks.  I've moved the whole project along nicely.  I'm hoping to get 24 or so blocks finished in the next week or so.  These are in all different stages of logs, but you get the idea. 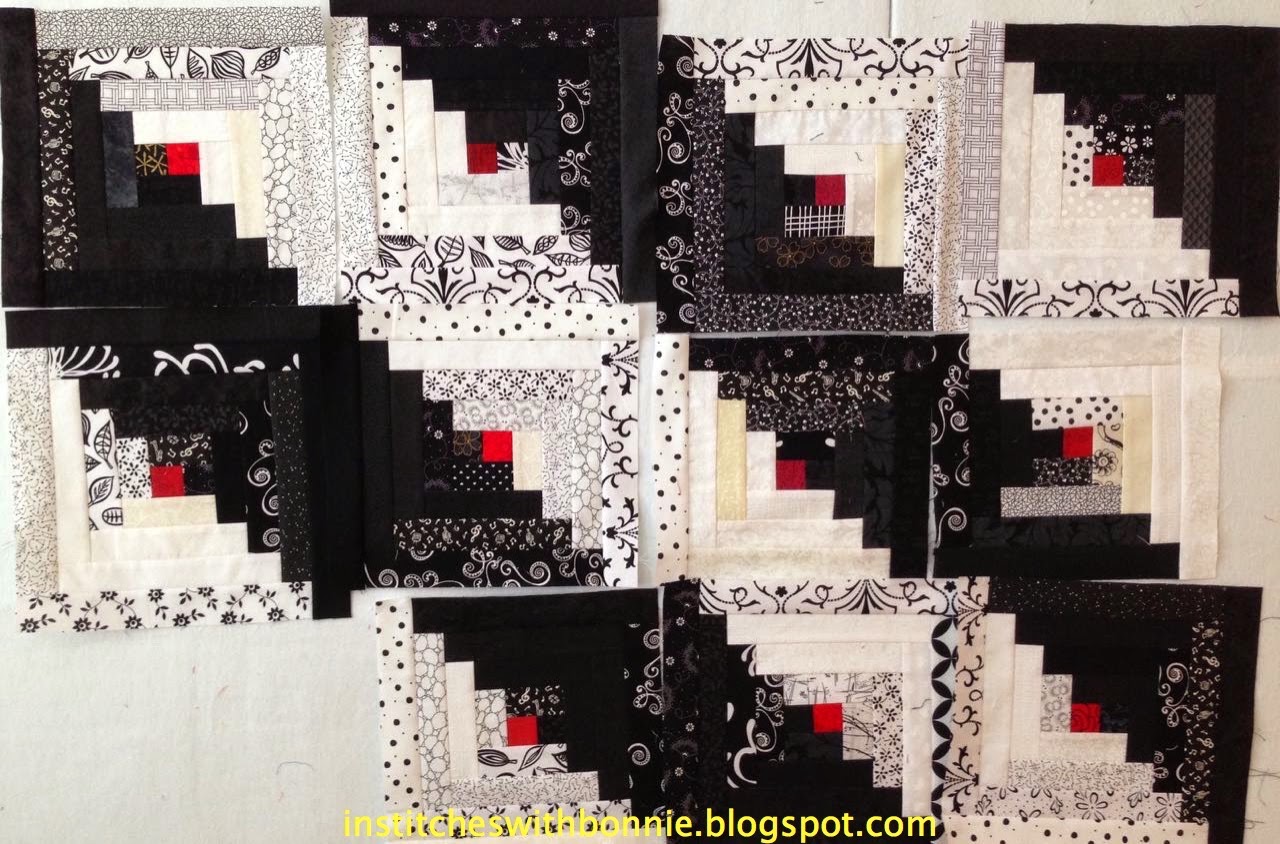 I started getting the borders on the Wild Dogs yesterday but had 2 long phone calls interrupt.  I will try to get at least some more borders on this week.  Who knows if I will.  Perhaps the log cabin blocks will go back to the back burner.

My goals didn't get accomplished for the most part.  And, it isn't looking too much better this week.  I've got a social obligation and a fun obligation.  Friday a group of us are going to the Mid-Atlantic Quilt Festival and I have a big shopping list.  Whoop! Whoop!

Week of February 16, 2015
Finish quilting r, w, and b quilt.
Make binding for r, w, and b quilt.
Get the borders on the Wild Dog Quilt Started finally
Attend several social things this week everything was canceled with one exception!

That's it from here.  I'll be linking up with Patchwork Times.