It's been a great month putting my fabric to use!  I am happy to report I have finished a UFO from 2008 -- or maybe it is from 2006.  I know I bought the patterns for the dogs at one of FCQ's Quilt shows and they are only held even numbered years.  Not to worry.  I'm calling it done although I will admit to needing to do some hand embroidery on the dog faces.  I don't watch TV much and that makes it difficult to sit down to actually do hand work.  Here are the yardage numbers.

Recently, I've been making blocks that I need to send out to Pam of the FCQ Equilters.  I haven't decided if I am going to make more or not so I didn't even include them in the list. That means I have a head start on the July fabric usage. Here are the ones going to Pam: 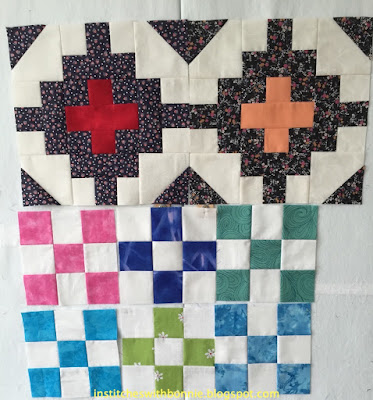 For those of you who don't know or remember, FCQ Equilters are folks who were members of Faithful Circle Quilters in Columbia, Md.  We've all moved away but have fond memories of our times together.  Right now there are 7 of us.  Each member gets a 2 month period where the other members make blocks based on what the member asks for.  Pam wanted cool colored 9 patches in jewel tones.  I'm not so sure about these being jewel tones but they were the colors she mentioned.  She also wanted the top block in either black with a color print or in red, white and blue.  I made one of each of those blocks.  They really aren't hard but I always have a trying time with them.

I was pretty late getting to these -- they won't be mailed until later this week.  Last night as I was working Joan's request for blocks came in.  She shared a quilt with us and asked for blocks to make it.  If I remember correctly she wants us to make any of 4 or 5 different blocks.  So, last night I made one. Hum, the left side seems a bit small.  I guess I'll redo those seams and see if I can get it to look more square. 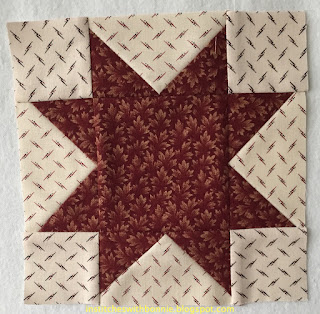 I found I need to keep looking at my to do list as I pulled out a different quilt yesterday and started to figure out the borders.  Except, it wasn't one I wanted to work on.  So I pulled it off and finished the above blocks.  Today I think I'll get the borders on Galaxy which will move that quilt over to the needs to be quilted side.  And, then I can make the backing for it. I'd like it done by August.

I'm linking with Let's Bee Social and Works in Progress on Wednesday.