We are home to stay for a while.  Yes, we were gone much of last week.  We were down in Nags Head checking on the beach house after Florence and the summer rental season. When we go in early fall Pat spends most of his time doing small repairs -- replacing window screens, moving outdoor furniture in to the storage area. And, he loves doing that.  I usually bring my Featherweight and sew on projects.  This time I decided not to bring the FW.  I did bring projects that needed to be cut out (appliqué stuff) and a sweater I'm making for Theo. 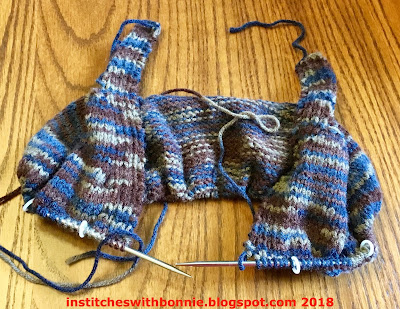 Yea, it doesn't look much like a sweater does it.  It's being knit from the top down. It's a v neck cardigan.  So the two things sticking up end up being the border at the neck.  I've gotten about 5 inches done and I realized I may not have followed the pattern correctly.  ARGH.  I'm suppose to have 205 stitches on the needle and I only have 164. I guess I'll spend some time this afternoon figuring out why I am 40 stitches short.  I may give up on this one if I have to rip it all out again.  Sigh.

I did do some sewing -- I threw a quilt on Ruthie and quilted it.  I haven't used her in 2 months or so and it was almost like I had to relearn how to use her.  Bummer.  But once I got her set up she quilted like a dream.  She's got a king size quilt to do next.... not mine, for a customer.

I did alright on my goals, however, I knew I was going to be gone most of the week so I was careful choosing my goals.

October 8, 2018
Theo’s sweater — finish taking off rows & then start knitting using the correct info!√argh
Continue cutting out pieces from Wacky Family Portrait, lay out pieces and fuse in place √ still need to resolve some issues… but progress was made
Load small quilt on Ruthie and quilt it! √
Put everything away from retreat - mostly put away!


Figure out additional fabric for friendship stars - nope, didn’t get to it

And this week:
October 15, 2018
Work on customer’s king size quilt - fix backing, load and begin quilting
Get the backing for the heron picture done, layout the bird pieces
Knit on Theo’s sweater
Pick out and embroider Sophie and Natalie’s Halloween shirts
Put out Halloween decorations…

Here are some more pictures from the Canada trip.  We left Quebec City and two days later stopped at Prince Edward Island. Scroll down here for a map of the area.  It is in the Gulf of St. Lawrence.   We took an Island Drive tour that included the Green Gables Heritage Place.  But first a bit of sites on the way. 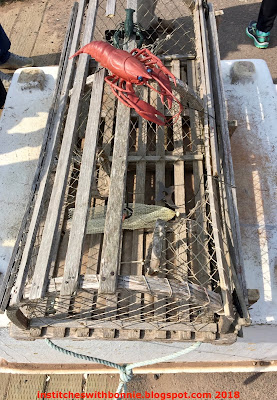 One lobster trap with a fake lobster.  Lobstering is a major industry in the Maritime Provinces.  We learned how a lobster is caught and how ingenious the traps are to keep them caught.  Here's a bunch of traps on a dock.  Lobstering has different time restraints in the various areas.  Mostly, you can get fresh lobster all year round.  Rules and fishing limits are in place to protect this natural resource. 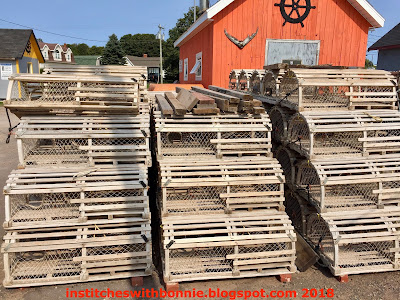 I was particularly interested because I lived in Newport, Rhode Island when I was 5.  We used to go down to the docks and get live lobsters that my mom would cook for us.  Needless to say my grandparents were pretty shocked the next year when they took the family out for a fancy dinner in Miami.  I ordered a full lobster dinner.  And, you bet, I ate that whole dinner!

We made one more stop on the shore before heading to the Green Gables Heritage Place.  First the sign... 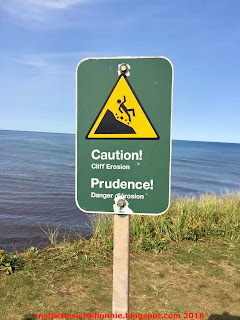 In English and French

And next the wondrous scenery... to the left. 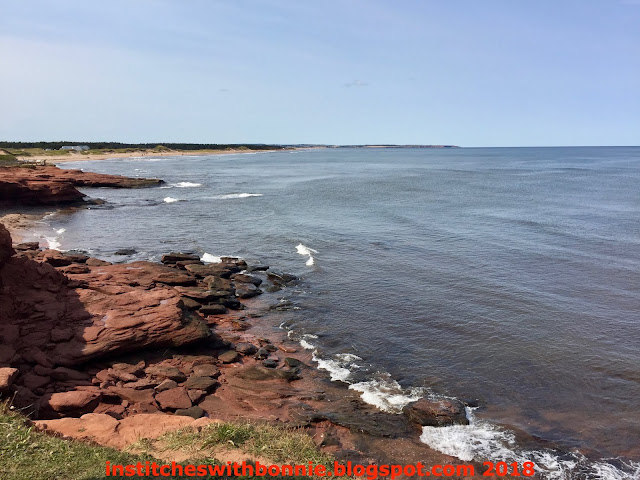 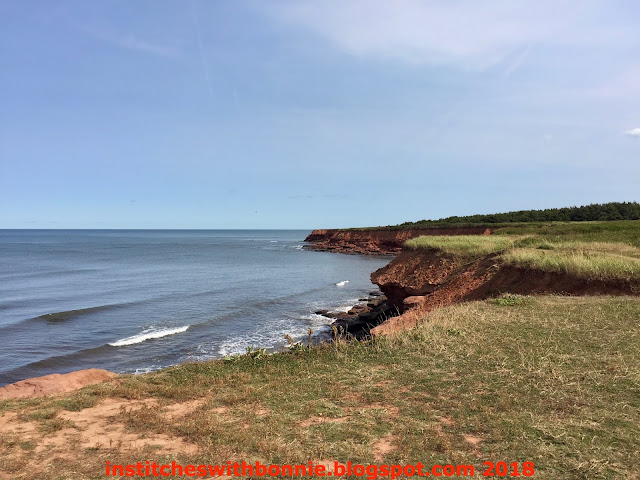 I'll be sharing more of Prince Edwards Island on my next post.

I'm linking up with my regular, wonderful linky parties: Oh Scrap, Monday Making, Main Crush Monday, and Moving It Forward. I plan to spend some time this week checking out quilters on the internet.  I haven't had a whole lot of time recently to do that.  Hope you can join me.

Happy Quilting All!  Bonnie
Posted by Bonnie at 11:49 AM