What a great week last week was! There were a few glitches -- our road was being top sealed so I couldn't drive down the street -- all cars had to be parked on other streets. (YUCK!)  I loaded up my car with everything except my sewing machine and parked it at a friend's house down the street.  Luckily she wasn't that far away.  In the morning I rolled my sewing machine down and packed it in and left.  But coming home wasn't as nice.  The street is still undrivable so I had to schlep suitcase, projects box, cooler, etc farther up the street.  I waited til Pat made it home before I got some of the stuff.  He was happy he had a weekend away starting Friday morning.  But it is foggy and humid this am so I doubt we'll be allowed to drive on it for awhile longer. Ick.

Retreat was wonderful, as usual.  I have such a good time with these gals.  It dawned on me yesterday that a retreat is like a giant slumber party except you get to quilt as much as you want and you can go to bed (in a bed) whenever you want.  The only downside of this particular location is the food is very much institutional and it seems to me it is getting worse.  I figure if I don't like the dinner next year I can always go out and get dinner at a nearby restaurant.

So here are the results from retreat: 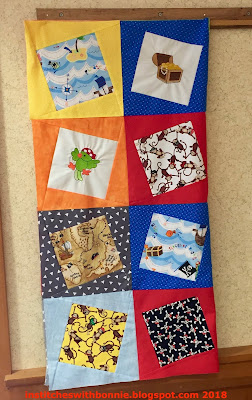 If you look at this picture I show my plan for the blocks with the twist pieces.  It seemed to take me forever to sew the pieces on the blocks.  Finally I decided to do all the blocks twisting the same way at the same time.  That helped speed it up until I went to lay them out.

I had a lot of duplicates of the upper left block and the various colored monkey blocks.  So I was trying to make sure duplicate blocks weren't next to each other as well as the twist fabrics not being next to the same fabric.  I'm pretty sure I drove myself crazy trying to do that because half the blocks leaned right while the other half leaned left and I had to think about that too.

In the end I made some decisions and just sewed it together.  The embroidery wasn't very flat (just look at that cute parrot).  I needed to use a heavier stabilizer or an additional piece.  But I'm fairly confident it will not look so "gathered" once it is quilted.

I didn't get any pictures of the friendship star blocks I was working on.  I ran out of the background fabrics when I was cutting so I could only sew 15 or so blocks.

Retreat had a monkey theme this year so someone had gathered a bunch of sock monkey fabric and offered us kits to make monkey wrench blocks.  They were gathered up to be made into a baby quilt for the NICU we support. Plus there were prizes for two of the finishers.

I also did a little retail therapy.  I'll try to remember to take a picture of what I added to my stash.  My third project wasn't very big but I did get some of it done.  I was using the book Sew Yourself a Merry Little Christmas by Mary Hertel to make two blocks for a Christmas wallhanging.  Except, I hadn't thought about what background fabric I wanted to use so the blocks aren't finished yet.

The block below is the block of the month lottery block for Faithful Circle Quilters.  Sharon and I both made one so MaryBeth could take them back up to Maryland for the drawing. (Yes, this retreat was actually for the Powhatan group but in the past they haven't been able to fill all the spots so when the call went out for more people I let my buddies in Maryland know and they were thrilled to come.) It is called Electrify.  Scroll to page 4 of this link for directions. (FCQ has a totally open web site.  If you noticed the info below the block directions -- there is a mystery quilt going on.  I think it started in September so you can go check that out if you like mystery quilts.) 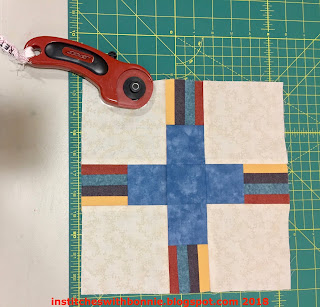 My goals were met somewhat.  I only really finished the one top but several others are well on the way to being finished.


Finish pirate top√, friendship star√ (as much as I had parts for)  and one more project! √ does the block I made count?

And this week I'm not planning on sewing as much.
October 8, 2018
Theo’s sweater — finish taking off rows & then start knitting using the correct info!
Continue cutting out pieces from Wacky Family Portrait, lay out pieces and fuse in place
Load small quilt on Ruthie and quilt it!
Put everything away from retreat
Figure out additional fabric for friendship stars

On to some more pictures from our Canadian trip.  These are all from the same area as the umbrella's I showed here.  In fact the gates were behind me as I took pictures of the murals.  This mural depicts some of the history and culture of Quebec City.  And, yes, it is quite the tourist destination.  I didn't have much time so I just took the pictures with tourists. 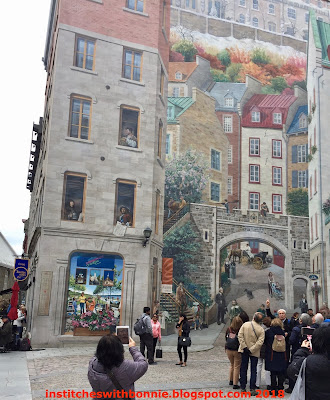 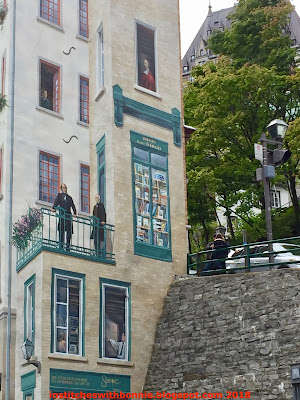 Right mural section.  It almost looks like someone is standing on the street talking to the men on the balcony. (Wait, when I enlarge this page the "someone" on the street looks more like a giant crow???!) 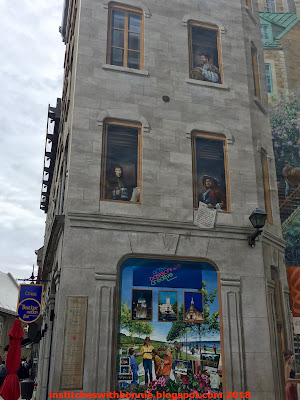 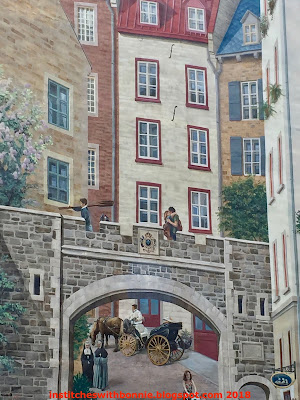 Because I was shooting over the heads of tourists I  missed the steps which depicting the stairs between upper and lower town. 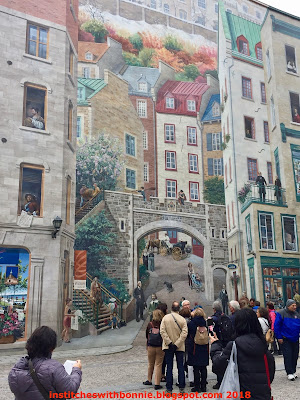 Here's an overall view of the mural with tourists in front. If I'd had the time I could have spent much more time looking at the murals. To read more about them with much better photos visit Amusing Planet.

I'll continue to add pictures from our Canadian trip each posting until I've shown all the major spots we enjoyed.  I'm linking up with my regular Monday linky parties: Oh Scrap, Monday Making, Main Crush Monday, and Moving It Forward.

I'm looking forward to a calmer week.  I may not get as much quilting done but I will be relaxing after two pretty busy weeks!

Happy Quilting All! Bonnie
Posted by Bonnie at 11:52 AM