I've been busy in the studio and making progress.  Unfortunately it is very slow progress -- partly because I'm still losing energy and partly because the blocks I've been working on have a gazillion a lot of pieces that need to be sewn. 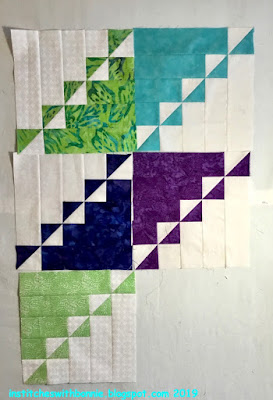 First up are blocks for Beth, who is a member of the FCQEquilters group.  The pattern is called Rickrack.  It is part of Missouri Star's videos.  Here's the link if you want to make some yourself.  This is going to be a really cute quilt when done.  Beth asked for cool colors.  Because the block is based on a log cabin style it can be laid out anyway a log cabin can be laid out.  Too cool!

I'm late finishing these blocks off so I should be starting on the next block.  Of course, I'm not ready to yet.  I need to figure out the finished block size so I make sure I get the units made correctly.  I think it is 20" or so and we only need to make one.  Should be fun to give it a go.

As I've mentioned before, the Country Piecemakers retreat is just around the corner.  I was working on getting a few kits cut out and bundled to make it easier to work on projects.  I have one completely done and another semi-done.  What I'm focusing on now is making blocks for the swap. Here are 5 of the hexagon blocks I've finished. Five more to go. Hum, I may need to use a few more mediums as the final round as the green one really sticks out. (Although I probably won't win any blocks.) 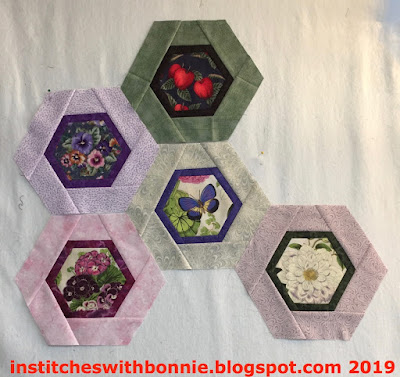 I realized I haven't shown photos from the rest of our California trip.  We were staying with my brother and sister-in-law in Orinda.  They were the perfect hosts and tour guides.  We went to the Walt Disney Family Museum in the Presidio.  If you are a Mickey Mouse fan or Disney fan this is a must see museum. 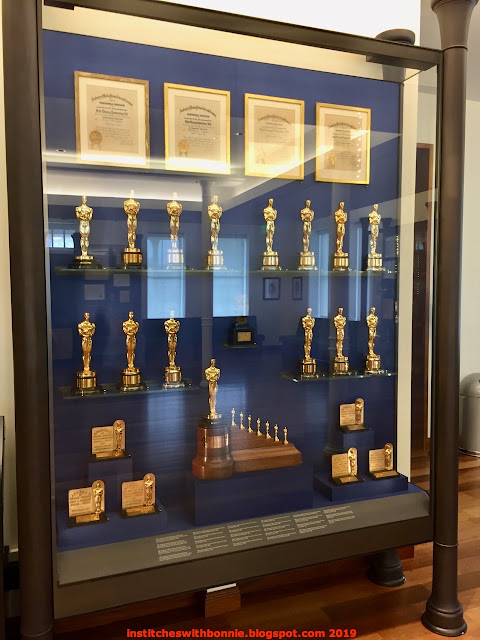 It's hard to see all the Oscars but check out the center bottom Oscar.  It was for Snow White and the Seven Dwarfs. Someone had a sense of humor! Mickey Mouse was evident throughout the museum. 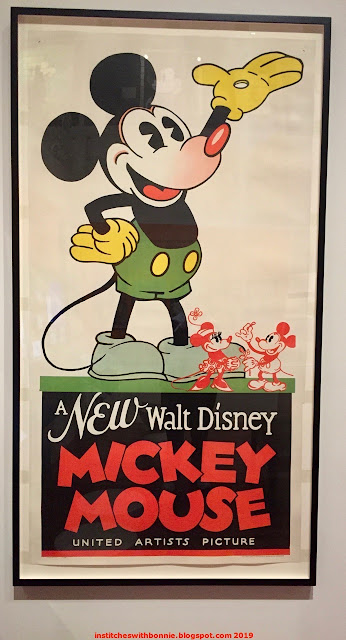 Here's a large poster showing Mickey circa 1933. I have to admit I was so busy looking at the artifacts and reading about them that I didn't get all that many pictures. 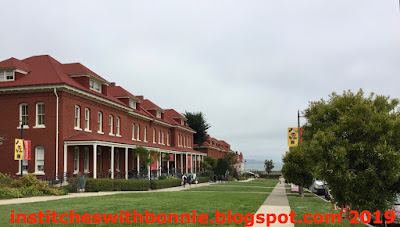 The weather was cloudy in the morning.  It's hard to tell but the bay is straight down the sidewalk behind the tree standing by itself. (Well, it probably is farther away than that but that's what it looks like in this picture.) The Presidio is a former Army fort on the northern tip of San Francisco. It's now part of the Golden Gate National Recreational Area. You can read more about it at Wikipedia's entry Presidio of San Francisco.

After several hours enjoying the museum we went over to Sausalito, under the Golden Gate Bridge. The morning marine layer was still hanging around. 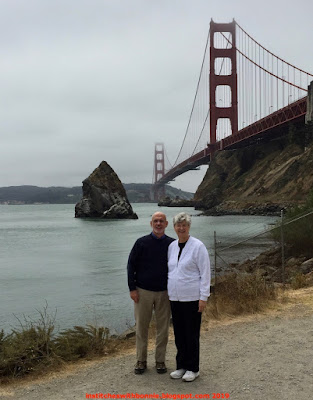 We had a great lunch in Sausalito and then went across the street to a harbor.  The sun was shining, the day had turned beautiful. Here are the tour directors: Larry and Jean. 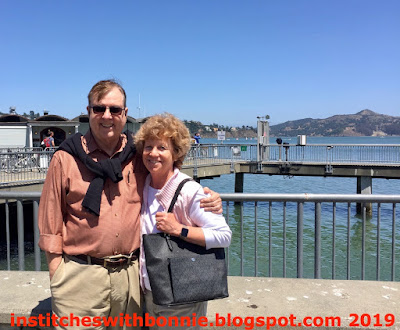 Unfortunately on the way home the freeway came to a grinding halt. We inched along for a couple of hours.  Argh, it reminded me of the worst of I-95 at home.  Overall it was a fabulous day.  I'll share our last day in San Francisco soon. (Notice that is an open-ended time period!)

I'm linking up with Oh Scrap, Monday Making, Moving It Forward, and What I Made Monday. I hope you can spend some time seeing what folk's are working on this week.