Let us always remember the sacrifices our military members and their families - active, reserve and retired - made (and make)  to keep our country free.  I add the families because my dad was in the Navy for 30 years and my mom, brother, and I moved a lot thus making new friends and seeing new parts of the United States.  But, I think of my brother who went to 4 high schools.  While at that time I was just in elementary school and two different middle schools.  I moved my senior year of high school and to this day don't really think of the school as "my" high school.  Dad went to the University of Southern California in the Navy ROTC just before World War II broke out.  He didn't finish college but went active duty instead.  He retired as a Captain having commanded a fleet of destroyers, an oiler, several different destroyers and serving on admirals' staffs.  He saw duty in World War II, Korean war, and Viet Nam war.  "We" also saw a lot of duty at the Pentagon.  He led an interesting life, to say the least. Both of my grandfathers served in World War I and my brother served during the Viet Nam war but was stationed stateside.  That's quite a legacy of service to my way of thinking.

On to quilting. I wish I could say I've made all those churn dash blocks into a quilt top but, no didn't work on those at all.  In fact, I put them away knowing I wasn't going to get to them at all for a while.  So instead, I'll show you what I did get done. 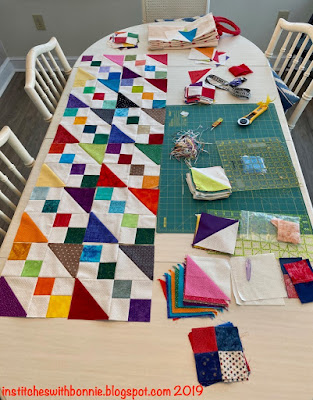 I cut this out to take to retreat in October.  Diamond Chain is one of Missouri Star's patterns.  You can see Jenny demonstrate how to make the block here.  I had all the dies needed to cut this out with my Accuquilt Go. Bonus!  I've been taking this project when I go to my community's quilt group.

We were at the beach house this weekend attending some property owner meetings so I grabbed these, my Featherweight, and set up a sewing nook overlooking the back yard.  I finished all of the units (at least I think I did) and got these blocks made.  I'll be at community sewing again on Thursday so hopefully I'll finish all the blocks then.  I thought they were going to look duller when I made my sample block but I guess I threw in a lot of fun colors so that livens it up a lot.

With Christmas sneaking up on me I'll probably have to spend more time finishing (heck, starting and finishing) presents.  I've got a list to remind me what to do.  I've actually made some progress on two projects.  There is hope!

I've noticed a lot of the Monday linky parties I've been linking with have stop posting. So today I'll be linking up with Oh Scrap, Monday Making, and What I Made Monday.