A Finish -- A Long Time Coming 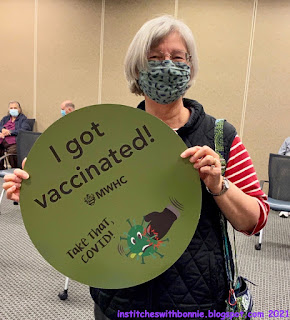 Wow!  Mary Washington Hospital Center was so very well organized!  I was really early for my appointment because I thought it was an hour earlier than it was.  No problem. They moved me in from car check in to being texted to come on in.  Yes there was a small line but it moved so quickly.  Next thing I know I was chatting pleasantly with the gal getting ready to give me the shot.  No, she didn't know how many shots she had given but I sensed it was a whole bunch. What? You're done already?  I don't think I even felt it go in -- amazing.  Then on to set my follow up appointment which is 4 weeks away.  I was done before my actual appointment time.
Backing up a bit  -- it started with the Rappahannock Area Health District being on top of their game.  I filled out an on line survey saying I wanted to get a vaccine several weeks ago. On 1/22 I received an acknowledgement and was told to expect a text when I could sign up for an appointment.  The email to sign up came in Wednesday morning. It probably sat in my in box for 15 minutes but once I saw it I immediately scheduled my appointment -- for the very next day!  Pat got his announcement within the hour but I had left for a hair cut so he didn't know exactly when my appt was so  he goes first thing tomorrow morning.  We were euphoric!  Kudos to the state of Virginia and RAHD for keeping us well informed and Mary Washington Hospital for being so organized. 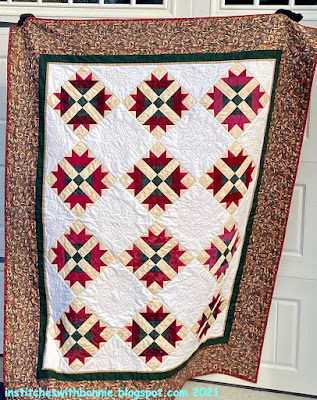 So on to my quilty news.  Today I share a great quilt.  I really love it but man, it has been very problematic.  First off an overall picture of the quilt.  I started this sometime in the late 1990s or possibly early 2002 or so.  I went to a mystery retreat in Lancaster, PA with several gals from my quilt guild.  We had a great time. I didn't get the quilt finished there so it got shunted aside.  Every once and a while it would come out and I'd get some of it done.  I can't say when I got the top completely together.  I decided to hand quilt it as it was before I had my long arm.  I batted it up and basted it and added some pin basting too.  I drug this thing around for YEARS! I'd mark a bit and hoop it up and stitch until my fingers were sore and I was bored.
Sometime in 2019 I finished the inside of the quilt and started in on the borders.  I don't know why I chose a braid that had 8 rows in it. (Yes, equivalent to going around the border 8 times.)  Near the end of last year I decided to get serious and get this thing done!  So mid January all the quilting was done.  It was time to bind it.  In my infinite wisdom I did put some of the backing fabric in the bag I toted around for years.  It had a note that said 6/2004.  I suspect that was when I started the hand quilting. I stitched the first side of the binding by machine and finished with hand stitching.  DONE!  Since I had been dragging it around so long I knew it had to be washed.  I think I've already mentioned that the backing fabric bled when some water for my iron splashed on it.  But, let's move to a picture or two before I finish this tale.
And, so it's time to continue my tale. Since I knew it was going to bleed I loaded the quilt in the washer with bunches of Color Catchers.  I mean A LOT.  Most were new, a few were slightly used and were very pale blue.  Shock number #1. 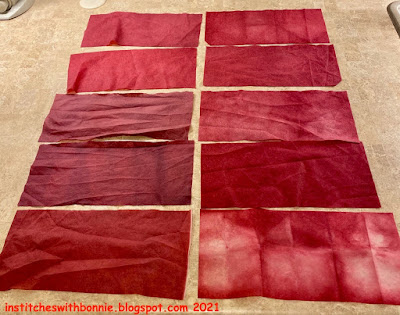 YIKES! Every single one came out a very deep red. Well, except that one with the fold marks.  Some how it had gotten folded and the color didn't penetrate the entire color catcher. (What does it say about my darn washer that it didn't agitate enough to open the darn catcher? Yes, it's a blasted front loader.)
Here's what the pathetic quilt looked like when I took it out of the washer the first time. 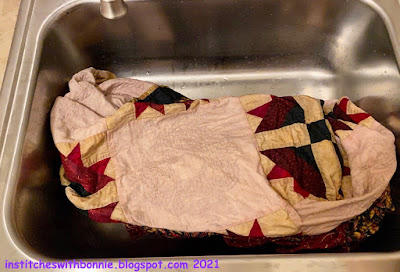 So, this is may be after the 2nd wash.  I wasn't thinking particularly well the day I washed this as I didn't put a towel or something else in to balance it in the washer.  It was dripping wet when done. I had to wring the thing out to get it so it wasn't dripping all over the place before it went in the dryer. Sigh.
It dried fine but it no longer looks the same. 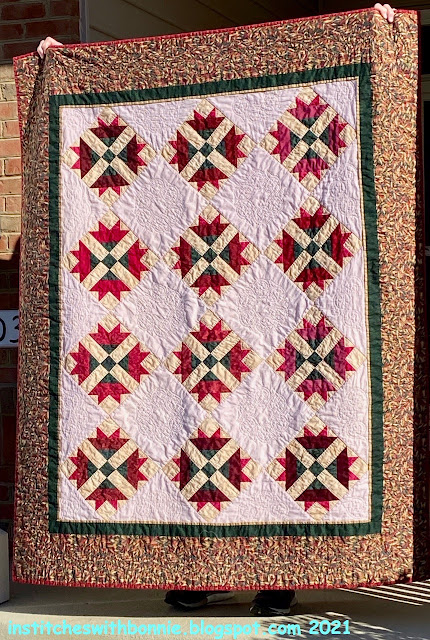 So, it isn't horrible but it definitely turned some parts of the quilt pink.The green isn't as vibrant either.  The squares of now pink, were a light cream with little gold specks in them.  I loved it.  But, I still like this.  It just isn't what it was.  Should I have washed the backing fabric before I used it? You bet!  I have been washing every piece of fabric (except precuts) for years.  Truth be told I don't know when I became so fanatical about pre washing everything. Probably when another red fabric bled like crazy.  Maybe that happened after I had already started quilting this one.  It will still look beautiful during Christmas and will evoke memories of the fun my friends and I had at the mystery retreat. But, boo for the bleeding red! Let this be a lesson to everyone who loves to use a strong red!  On the other hand, I'm so glad I dropped water on it and learned it was going to bleed.  I might have put a lot less Color Catchers in and had an even pinker quilt. And, no I don't blame the Color Catchers.  They did the best job they could have -- I should have put the whole box in!
I'm happy to link up with Midweek Makers, Needle and Thread Thursday, Can I Get a Whoop, Whoop?,  Finished or Not Friday, and Beauties Pageant. Ok, I'm way ahead of where I usually am for a second posting of the week. I'll be back tomorrow to link to the last two parties. You know the drill -- go visit some of these linky parties... you will enjoy seeing and reading about what's going on in quilting rooms across the country!
This has been a great week.  I'm one seam away from finishing the commissioned T Shirt quilt top.  I've been shot. And, I shared a quilt that was a long time in the making. It's all good.  Hope you are having an excellent week too.  I've got a busy day tomorrow so I should be finishing this up and heading to bed!
Happy Quilting All!  Bonnie
Posted by Bonnie at 11:18 PM