Today I spent the day with some ladies from the neighborhood viewing the Pablo Picasso exhibit at the Virginia Museum of Fine Arts. The works were ones that Picasso chose to keep, his personal selections. His heirs donated them to France after his death. The works are on loan from Musee National Picasso in Paris. The exhibit  "...features 176 works and provides a detailed look at the prolific career of a man who is regarded by some as the most influential artist of the 20th century." (Richmond Times-Dispatch, 2/19/2011.)


I am not an artist by any means.  I don't understand modern art at all.  Yet, the works on display at VMFA were challenging, enjoyable, varied and amazing.  Apparently Picasso continued to paint nearly to his death.  He has an amazing body of work. And, as stated above he may be one of the most influential artists of the 20th century.  Last year one of his paintings sold for $106.5 million to a private collector. I believe it was the most ever paid for a painting. (Really, a Picaso, not one of the old masters?)  Here we are after the exhibit.  If you want to see a huge number of Picassos plan to come to Richmond before mid May.  It's the only city on the east coast that has this traveling exhibit. 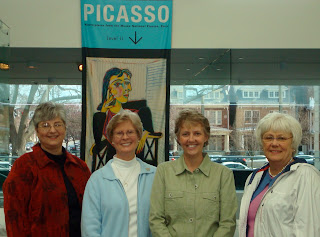 How does this relate to quilting?  Picasso was not a specialist. He was eclectic. Think of some of the great quilt makers: Carol Doak is known for paper piecing, Karen K. Stone for her New York Beauties, Mimi Dietrich and Elly Sienkiewicz are known for their Baltimore Album quilts. Now lets think about Picasso.  He tried so many different styles.  And, he didn't start one and work his way through it and move on to a new style.  He would go back to various styles through out his career. We did sculptures, he worked in oils, colored pencils, prints. He started in what was called academic style -- people looked like people. He was influenced by Van Gogh and Toulouse-Lautrec. He was interested in African art. He was influenced by surrealism.  He pushed modern art to new frontiers.  I'm not a fan of cubism or surrealism but I admire his work and what he did for art over the 20th century. I can't think who might be considered the Picasso of the quilting world, but I am sure there is someone out there who might be so considered.  So those of us who jump around making scrap quilts, appliques, log cabins, paper pieced blocks.  Think of ourselves as following in the footsteps of Picasso.  Trying many things and working at them enough to be good at many different styles.


One thing I do, especially in museums and gift stores, is look for color combinations that I might use for a quilt (if I can find fabric in the colors.)  I fell in love with these pieces in the gift store.  Of course, I didn't buy them I just take pictures.  Hum, this could be interpreted in piecing and quilting as well as color.  Something to think about.  The picture doesn't do the color justice but I like it. 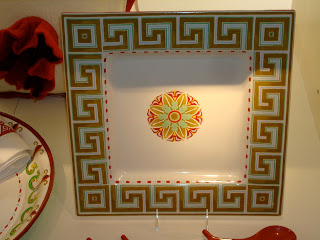 These were cool because of what was used to make them. These are covered in  small strips of paper curled and then applied to the bases.  I'm not sure how or what the base is, perhaps ceramics.  I just thought the end results were incredible. 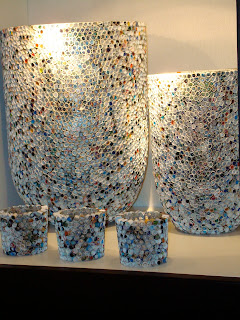 These baskets really struck my fancy.  They are African and the designs amazed me.  The baskets are made out of telephone wire.  There were ones that were made from multiple colors but these black and white ones were fabulous.  I can see these designs being interpreted in a quilt also.  Hum, I have a collection of black and white fabrics in the studio.  Perhaps these will inspire my use of them. I have a small collection of interesting baskets. One of these would have made a good addition.  But, I just looked and photographed. 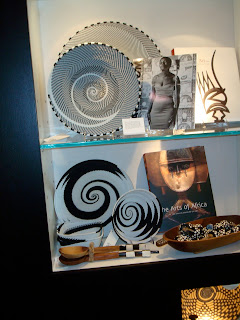 Tomorrow I get back to quilting.  I have three charity baby quilts ready for quilting.  They were made by one of the guild members and I'll be quilting them.  I decided to sew two of the backings together to load on Ruthie at one time.  I'm sure it will be much faster as when I'm done with the first I can move right on to the second without having to unpin and repin the next backing.  Hopefully both will be finished tomorrow. I'll post pictures if the owner doesn't mind.
Happy Quilting All!