For several years I've saved all of my used thread spools and reviewed how much thread I've used up over the year.  Here's the 2015 report, um, photo. 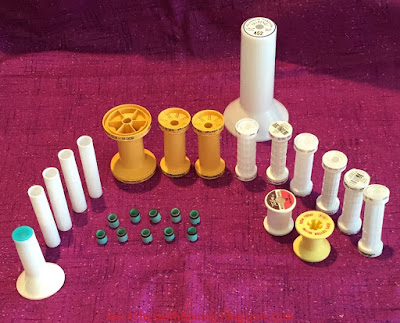 That's quite a variety of spools.  The big one in the back is from the long arm.  The little green and black in front are prewound bobbins for the long arm.  And, the white with the turquoise top is bobbin thread for embroidery.  I've done a LOT of embroidery in 2015 as I'm almost done with the spool that I bought to replace that one.  Total: 27.  The short spools are really old.

How does 2015 compare to previous years?  You can view 2014 here, 2013 here and 2012 here. (Yep, I really have been keeping used spools that long.The good news is Sharon insisted that a photo was enough and I should throw away the actual spools. Except the rewound bobbins will be going back to the company.)  How do the numbers compare?  Here's the skinny on that: 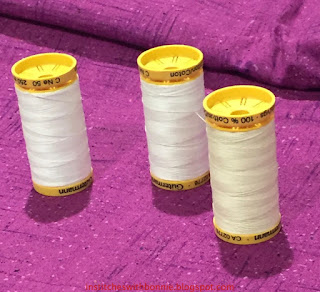 I took advantage of 50% off all threads coupon at JoAnn Fabrics and bought these.

Three new neutral threads.  I guess I have been sewing like a fiend (especially between Christmas and New Years) because I was down to 2 of these bigger spools and one was about done.  I'm set for several months depending on what I choose to do. Do you save your spools to see how much thread you finish each year? 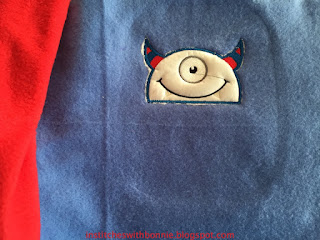 I've also been working on the hats for Sophie and Natalie.  If you've been reading for a while you know that none of the hats I made for Christmas presents fit the intended recipient.  I was able to move the child-sized hat to the toddler and now I'm making new ones for the older girls.  Sophie liked this one eyed monster.  Her hat is done and Natalie's is embroidered.  My job today is to finish Natalie's hat and get both in the mail.