We're in the new house! With a LOT of boxes waiting to be opened and unpacked. The furniture arrived Thursday and we've been busily unpacking and putting things away.  Only problem? We've downsized and the kitchen is minuscule.  ARGH!  We've already got 2 boxes going to charity and we took lots of boxes to charity before we moved.

In the middle of the packing up, unpacking and general upheaval I finished my June goal for OMG.  Ruthie came down about 2 weeks before we moved and I made sure I had finished the quilting.  I got one side of the binding done before all the machines went into a small storage unit near where we moved to.  But I ran out of time to do the other side of the binding by machine.  So in the down time I was able to get it sewn by hand.  Yea for another finish! 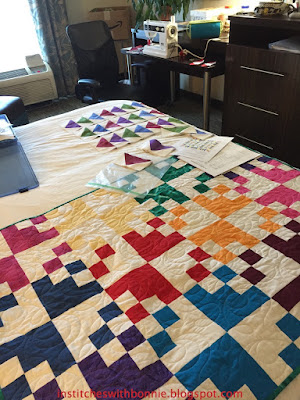 And yes, that is one of my machines on the desk being used.  We had a day between moving out and moving in.  Like any good quilter I had a machine and a project box with me.  I'm working on a project that I cut out for the May retreat that really didn't get anything done on it then.  Luckily I've taken it to two sewing opportunities and have got all of the flying geese together and the center pieces put together.  I have appliqué to do still but there will be time at some point to do that and then put it all together.

My July goal is minor.  I'm going to a class in Maryland and my goal is to get the whole top done before the end of the month.  Yeah, we'll see if I can do it

Here's what the studio looks like now.  At some point I'll be able to show the finished space but it'll be after we get some cabinetry into it. 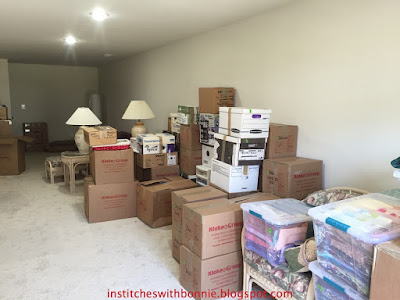 I am so out of the habit of blogging it has taken me two days to write this.  On the other hand, we've emptied another 10 to 15 boxes and put the contents away. And the hardest part of that is putting the contents away!

I'm linking up with Red Letter Quilts and Let's Be Social on Sew Fresh Quilts. Hopefully I'll be starting to blog more regularly now.  Don't hold your breath as there is a ton of stuff still to be done but I need another sewing day soon!