This is my last quilt top made in 2017.  It actually is a left-over-fabric quilt.  I don't remember where the hot air balloons came from -- possible a garage sale. I had to check several patterns before I found one that used the amount of fabric I had.  The blue and purple were leftovers.  The red was actually yardage, again, purchased from someone selling off part of her stash. It's ready to be quilted. I have enough of the red to use as a backing.  The pattern is from one of Ursula Reikes' Quilts for Babies books. 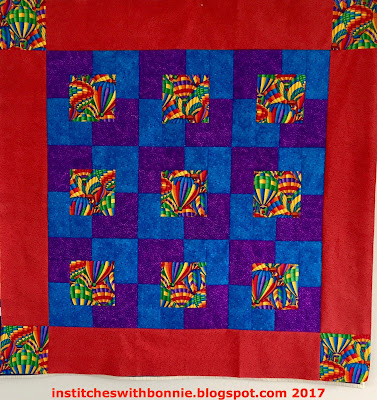 Next up -- more pictures from our trip.  We had pretty much given up on cruising as we really don't like the size of most cruise ships.  But, take a look at this picture.  Our ship is in the front with a huge Norwegian Lines ship in the back.  Pat tells me we were cruising with 700 customers compared to the 4,000 to 5,000 cruisers on the big ships.  We'll stick to the smaller ships. We were on Regent's SS Mariner. 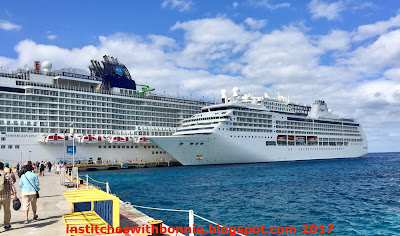 There was plenty of food around but one evening everyone went to a big barbecue. There was a roasted pig, fruits and veggies, and breads of all kinds. Several photos didn't turn out but here are a few.  Hum... is that a length of fabric under that shrimp?? 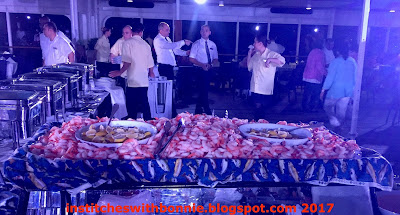 There were beautiful ice sculptures and watermelon flowers. 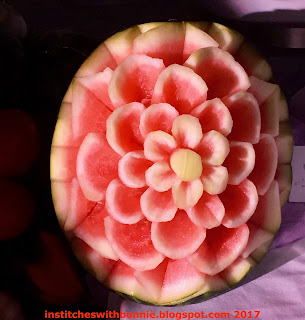 Our next stop was in Guatemala.  We took an excursion up in the the mountains to see some Mayan ruins.  On our way we saw some bananas growing.  This picture is blurry because we didn't stop so this was from the moving bus. 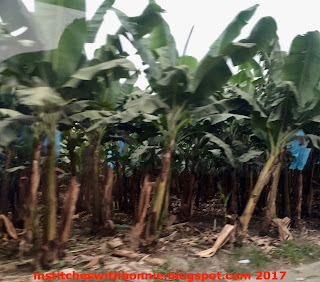 Bananas are a cloned fruit.  Next to each green trunk (stem?) there are two short sections of the "mother" and "grandmother" trees.  Our guide explained that these trees were not removed as they provide some nutrients.  The blue bags are actually the banana bunches covered to protect them from pests.  Much of the work with banana growing is done by hand.  They are picked while green so that they are just turning ripe when they are sold at the stores.

I'll show some more pictures over the next week or so.  I haven't been doing a lot of quilting recently.  Not much to show there.  But I'm ready to jump back into quilting.

I'm hoping I'll be getting back to my weekly goals next week.  Heaven knows I need the list to keep focused on getting things done.

That's it for me today.  I'll be linking with Monday Making, Main Crush Monday, and Oh Scrap!  I'm looking forward to spending so quiet time seeing what folks are working on these days.