It wasn't a stash busting year.  Sigh! On the other hand it wasn't terrible either.


Frankly, I was surprised to see how much was used. Here's a review since 2010 when I began keeping statistics. It was my 2nd best for using fabric.  *FYI - I only count fabric used when it is complete -- a finished quilt, doll dress, pillowcase.  When an item is finished then it is counted as used.  I'm not terribly upset with my purchases.  I suspect I will have quite a few finishes this year as I hope to get some of the tops I have hanging around completed as well as a lot of pillowcases made and donated. 2017 was my 2nd best in terms of fabric out and in.

stelas and zoomorfas.  (Stelas are tall sculptures where the history of the time was carved.  Zoomorfos are squat, frog-shaped sculptures also used to tell the history.)


As we rode back to Santo Tomas de Castilla, we saw plenty of big rigs, smaller trucks and lots of motorbikes.  I couldn't catch a picture of the woman riding with an infant in a pouch on her back but I did capture this family. It was not unusual to see motorbikes with children riding on them with a parent. Sometimes we saw a rider (or two) with a big package tied on to the back. 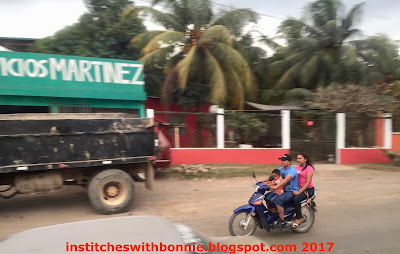 Our ship was docked at an active shipping port.  Pat and I spent some time watching the loading of the ship docked in front of us. It was receiving mounds of brown something that was being dumped into the hold of the ship.  A fellow passenger told us that it was soil being shipped to Russia where they extract minerals from it.  Pat and I thought it might have been from coconuts -- the outer husk.  In doing a little research I couldn't verify either idea.  US is the top receiver of goods from Guatamala and their top export is fruits and nuts.

The oddest thing we ran into during our travels we first experienced in Guatemala: a bathroom thing.  At Quirigua Archaeological site no toilet paper was put in the toilets.  There was a plastic lined trash can next to the toilet to dispose of the toilet paper.  We found this to be fairly common at many of our ports once we were away from the tourist area.

That's it for me today.  I'm linking with Can I Get a Whoop, Whoop? and Oh Scrap when it becomes available.  I hope you'll join me in viewing what folks are doing in their studios these days.  Right now, I'm going down to the studio to load a quilt onto Ruthie 2.

Happy Quilting All! Bonnie
Posted by Bonnie at 11:49 AM