Are you a fan of RSC, Rainbow Scrap Challenge?  I seem to participate every other year or so. Although I spend some time nearly every day in my studio I am not a particularly fast planner or doer when it comes to making quilts and such.  So some years I'm all about finishing projects or working on things I want to do.  But some years I like to add the RSC as a form of using more scraps. Instead of doing several different block sets each month, I've joined Table Scraps Challenge at The Joyful Quilter. Ok, yes I did start one new block set with January's pink that I plan to continue. 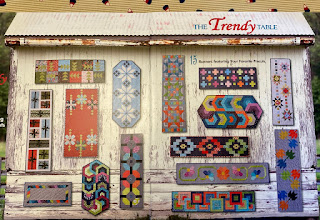 But first up is my Table Scraps Challenge runner.  I realize I don't have a lot of pink but did have some fat quarters I really like.  I have a couple of table runner books and books I know have table runners in them.  Plus, I have files of quilt pictures on my computer.  I looked at all of them until I chose Fusion from The Trendy Table by Heather Peterson of Anka's Treasures. (Wow! I just realized she's written two more Trendy Tables books.)

I decided I wasn't going to use just pink so I selected a light grey allover design and Navy Kona solid. I was going to make it smaller to fit my dining room table. I got to cutting.  Have I mentioned I don't always read directions completely? First, I had to figured out the right size and quantity to cut my pieces. Then I had to sew them the right way. (Really? Why?) Which led me to having to rip frequently.  Oh yes, there was a whole post recently on Jack the Ripper.  This table runner was helped by my friend Jack. I digress.

After the top was pieced I used my Bernina to quilt it. Yes, I do have a long arm but I only had a small backing and I wanted to do specific things around the design.  I was pleasantly surprised that I could still quilt on the domestic machine.  It's a whole different way of doing when you compare a domestic machine to a long arm.  I remembered how to push the fabric around. First up stitching in the ditch.  Next I did a bit of stippling. (That was a bit harder than the SID.) Then I got out my trusty 1" painter's tape to mark some straight line stitching. As I got going on these steps I realized it was imperative to think about where I was going so I didn't have a bunch of starts and stops.

Because the straight lines went off the edge of the table runner, I was able to run my stitching off and then make a turn and stitch in the excess until batting until I wanted to make a turn and stitch the next straight line area. That made it much easier as long as I thought about stitching before starting.  And yes, my pointer finger was tracing the lines to make sure I figured out what to do before the machine did its work.

The final stitching was a curve in the pink pieces.  Again, I thought about the best way to do it to eliminate starts and stops.  Having the navy separating parts of the quilt meant I did have quite a few beginnings and endings.  I did not stitch in the navy at all.  I used a bendable ruler to create a pleasing curve and then drew it on a piece of lightweight cardboard.  I cut it out and had two shapes I could play with.  I used it to draw a line on the pink pieces to give some motion to the quilting. 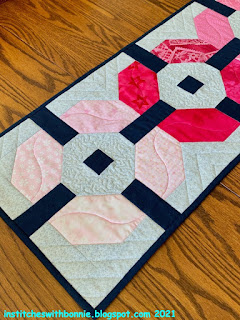 As I was quilting I was pondering the binding.  I had enough grey or navy to do it.  I probably had enough of one of the light pinks to use as a binding too.  But after consulting with my quilting buddy Sharon, we both liked the idea of the navy. (Thank goodness I had enough for it and another quilt I wanted to bind with it!) 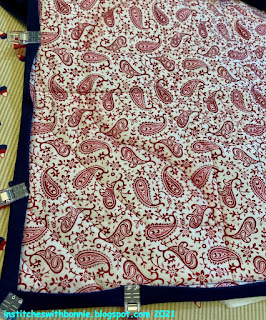 I don't often hand stitch binding down any more.  Most of my quilts are donated.  The last thing a recipient wants is the binding to fall apart so I normally sew both sides on the machine.  But this was small and I was willing to spend the time to hand finish it.  I LOVE the backing fabric.  I've owned it for years and have used little bits and pieces but I thought it worked well with the front.It looks mostly cranberry but it has a bit of pink within the paisleys. And if I want, I can flip the runner and use that side for a while.

Here are some glamour shots --- 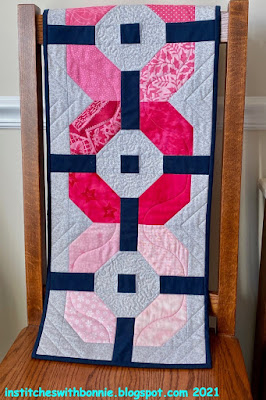 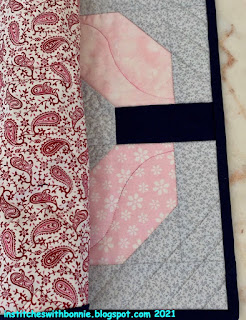 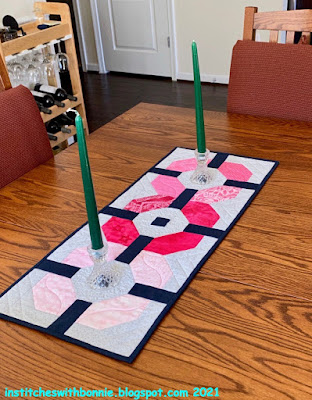 My first Table Scraps challenge is complete.  I enjoyed working with pink and some friends.  I love the backing fabric that might be flipped to use sometimes. All of these fabrics came from stash so I'm tickled with that too.  I am happy I can still push fabric around under my domestic machine and have some decent results. The best thing I can say is I really enjoyed this challenge.
Lest you think I didn't really start blocks, here are the two pink star blocks I did.  I specifically made them to test a block I'm putting with the t shirt quilt but I decided a bunch of different Friendship Star blocks in a rainbow of colors would make a nice quilt eventually.  I think I need to make a few more. 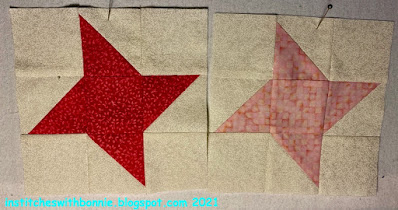 I'm linking up with Finished or Not Friday at Alycia Quilts, Beauties Pageant 114 at From Bolt to Beauty, Scrap Happy Saturday at Superscrappy, and Table Scraps Runner/Topper Challenge at The Joyful Quilter.  Enjoy seeing what people are doing, especially with pink around the Internet.  Monday starts a new color -- bright shiny yellow.  Angela mentioned it in her post today.
Happy Quilting All! Bonnie
Posted by Bonnie at 5:18 PM