Can you believe it?  I have another finish.  It was done at the end of May so it seems appropriate that I also share my stashbusting stats for May.  Yes, it generally takes me a while to get the stats together and publish them.  This time I had lots of smaller bits of fabric scraps to measure and record from part of the group Jenny gave me.  So here's my awesome stashbusting statistics!

I was so sure I'd brought in way more fabric than I used.  Well, surprise -- I used 3.375 more yards.  Even though I've had a big influx of fabric already in June, I've loaded a twin size quilt backing on Ruthie and will finish it and quilt it over the weekend and next week if needed. Between it and possibly one or two smaller quilts I should be able to use more fabric in June than I bring in.  I'll keep you posted. 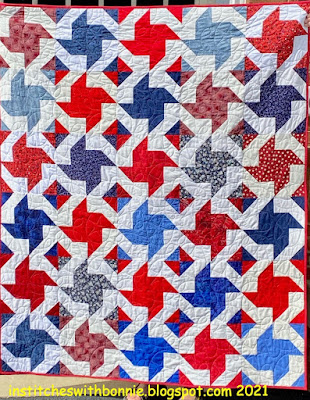 Here's the quilt I finished at the end of May.  It is a pinwheel quilt, kind of.  You start with 2 squares of fabric and follow some special directions to get two finished blocks. The closest I've seen to describing how the block is made is in the book "Sew Simple Pinwheels" by Karen Hellaby.  The major difference is the directions I have start with 2 14" squares, a light and a dark and you sew 8 triangles sets at the same time on the block. Then like in the book you cut the HSTs in half, trim them and sew them back together. The blocks finished at 11".
Quite a few of the blocks were made by members of a group I was in and then sent to me so I couldn't count all of them.
Pattern: Pinwheels (I was taught the block at a guild retreat but don't know the name.)
Quilting Pattern: Ginger Star by Apricot Moon.
Thread: Omni Natural White by Superior Threads
Size: 56 x 67.5" 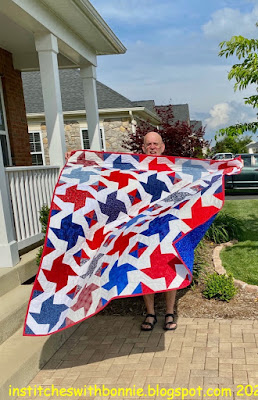 The wind was blowing like crazy as I tried to get pictures.  I'm surprised I was able to get several while the wind slowed down.  Below is the back where you can see the quilting better.  All of these pictures can be clicked on and enlarged. 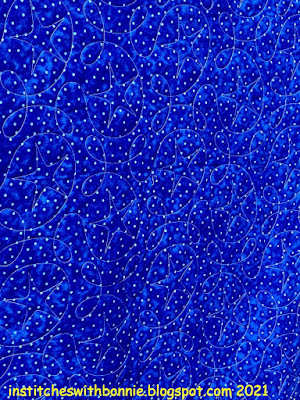 I'm not exactly sure who will get this quilt but I'll be giving it to Virginia Star Quilters to donate to a veteran at some point.
Next up, I've been making log cabin blocks with my Ombre Confetti fabric.  And I am tickled with what I've made so far! I think I decided to use 6 of the 9 ombre fabrics. You can look at Monday's post to see the 9 fabrics I have to use. 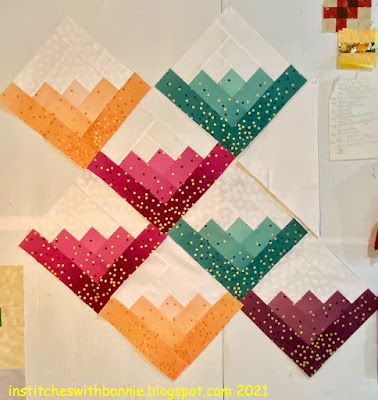 Although I didn't take a picture I'm also making Positivity blocks at the same time.  I think I got 4 of those done. (Check out the top logo on the right  for a link to Preeti's Positivity Block sew along.)  I haven't been sewing as much as I usually do so I'm not really cranking out blocks.  I still need to cut the ombre pieces from the strips I cut but I have several of the white strips already cut to size.  I know I'll have to find some more white on whites to make the number of blocks I want.  Stay tuned for more blocks in the next few weeks.
Are you ready to get your party on?  Here's where I'm linking up and hopefully you'll start some surfing by visiting some of these parties: Mid Week Makers, Needle and Thread Thursday, Can I Get a Whoop, Whoop, Finished or Not Friday, and Beauties Pageant. There are a lot of blogs to visit so let's go surfing now, everyone is learning how.... oops I got a little carried away with the Beach Boy's song Surfin' Safari. Need I say I'm a big Beach Boys fan?
Happy Quilting All!  Bonnie
PS -- Is it just me or have we always had an option to add fonts to the list of available fonts on blogger?  I bet I'll be choosing a new font every once and a while.  Darn, no Comic Sans which is one of my favorite fun fonts.  Remember let's surf the web for quilt blogs.
Posted by Bonnie at 9:24 PM