December Stash Report and the Beginning of the New Year

Month of December and the end of the year report


Now on to an exciting addition to my quilting life in 2012.  I have been selected to be a member of Quiltmaker magazine's 2012 Scrap Squad.  Yippee.  I'm looking forward to working on 6 quilts for the magazine during the year.  If you don't know what the Scrap Squad does each member makes the same quilt from an issue of the magazine before it is published.  I've got the directions for the first quilt and have pulled the fabric.  So look for more secret projects in my goals each week. 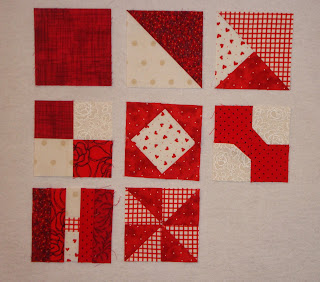 Here's a peak at the 12 Days of Christmas Mystery.  I've got 8 blocks to show you now. Although Temecula Quilt Co. sold kits to make this little gem, I'm super pleased with my red and whites. 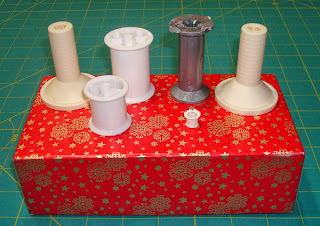 After seeing another blogger show all the empty thread spools she had to show for a year's worth of quilting, I decided to do the same thing.  So, here's the thread I've used up this year.  Hum, doesn't look like all that much considering this is both piecing and quilting on Ruthie.  But take a look at this next picture. 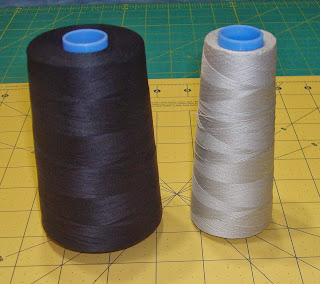 Last year, Pat bought me two cones of thread from Connecting Threads.  One was silver grey and the other was black.  So, yes, I have been using a lot of thread but it was only the silver on my big cone.  I unwrapped the black today to show how much I've actually used of the silver this year.  Yep, quite a bit.  I figure I'll finish the silver by about May or so.  Then I think I'll use some of the beige cotton thread I have hanging around before I buy more.  And, the poor black?  I have two additional large spools that I haven't made it through yet so I don't think this cone will be seeing any use for a while! And, I seldom use black unless the quilt is mostly dark.  Grey is my preferred piecing thread.