Tea Leaf
This design is number 1734 in Barbara Brackman’s Encyclopedia of Pieced Quilt Patterns. It is attributed to Modern Priscilla, a periodical begun in 1887 that offered mail order quilt patterns among other articles.  This pattern was dated 1928.  It is also attributed to Nancy Cabot who gave it 3 different names during 1937, including Tea Leaves. You can get a printer friendly version here. 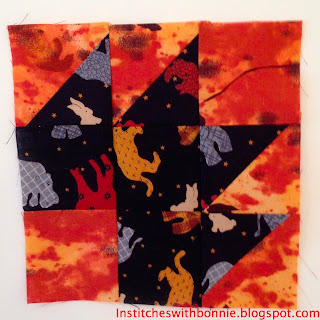 Cutting directions are for 6” 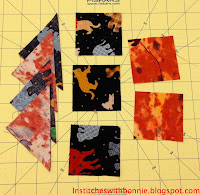 Here are all the pieces --  each triangle piece is actually two, ready to be sewn together.

I did something differently this time as I was using two fabrics that were originally cut off from the same blocks.  Rather than use the template to cut the exact size of the unfinished block, I sewed the two triangles together and then trimmed the half square triangle down to an exact 2 ½” block.  I think it was a bit faster yet used up some waste triangles. 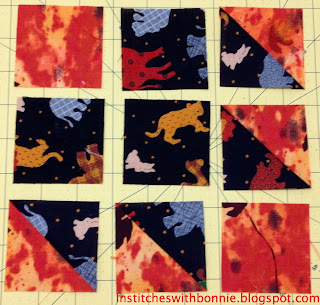 Here are all the pieces laid out in the correct order. The block is ready to sew into rows now. You know the routine.  And below I’ve sewn the rows together. (Note to self...arrange the block the same way for each picture!) 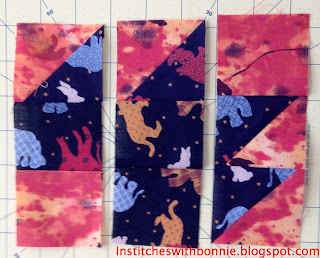 When pressing the rows, I ironed the center row to the center block.  In the top and bottom rows the seams were pressed toward the outside edges. (or the right and left sides as shown here!) However you choose to iron your seams the ultimate goal is to nest all adjacent seams.


Once the rows are done, sew them together matching where the units meet.  I ironed the rows toward the center.

It was good to use some of the same fabrics as last week’s. But honestly, these little animals don’t lend themselves to a leaf block! None the less, by the end of the year I’ll have a enough blocks for some little quilt.  An additional odd note:  these photos except the finished block were all taken on the same rotary cutting board.  Yea, weird that the colors came out so differently.  And, they were taken with the same phone within the time it took me to make the block, probably less than an hour once I had the fabrics picked out and cut.  I need to measure the finished block to see if it is really out of square or it was the picture that made it look strange.  See you next week.