This design is number 1311a in Barbara Brackman’s Encyclopedia of Pieced Quilt Patterns. It is attributed to The Kansas City Star around 1940. Although this is a very simple block it can be used with four together to get a very nice 12” block.  Sometimes I see it as a just two rows of half square triangles.  But other times it looks like a light triangle in a group of darks with a mirror image of a dark triangle in a group of lights.  I guess it really depends if I am thinking of dividing it in half side-to-side or whether I mentally divide it on the diagonal. Look for a printer friendly version here. 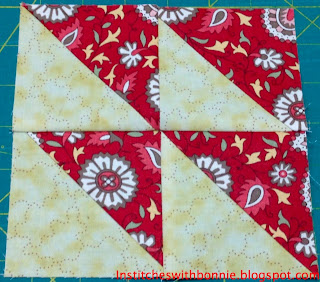 Cutting directions are for 6”

I used red triangles left over from the table runner I showed on Monday.  One thing I needed to be careful about is where the straight of grain iss.  I always try to have the straight of grain on the two sides of the corner and the bias along the long side of the triangle.  That is the normal way a half square triangle is made.  And, when the block is done the bias is neatly “stashed” away and the edges are more stable.

Here are all the pieces --  OOOPS!  I forgot to take a picture before I sewed the triangles together.  To help your imagination – think of 4 dark and 4 light triangles. 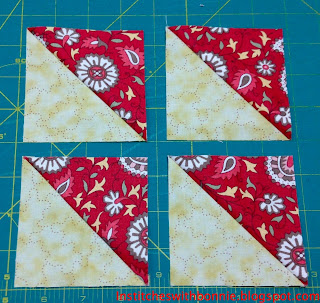 Yep, it is a very easy block but a very useful unit in a bigger block.

Next week’s block I will be using actual fabric from my stash as the finished piece will be my entry in my guild’s crayon challenge.  We must use the 2 crayon colors we picked out of a bag as solids with black and we can only use squares and triangles. It’s due the second week of May so I need to get on with it. I found a great block to use in Brackman’s book and I have the plan all worked out in my head and partially on paper!