Right and Left
This design is number 2406 in Barbara Brackman’s Encyclopedia of Pieced Quilt Patterns. This is from Ladies Art Company which began publishing quilt patterns some time in the 1890s. This design was in number 195 which means it was probably published anywhere from 1889 to 1895. Click here for a printable version of this block. 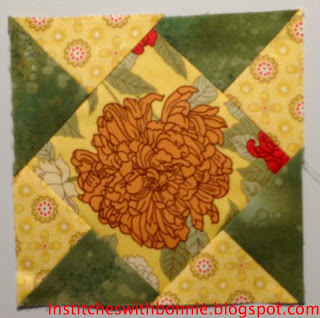 All of our previous blocks have used triangles that were cut by cutting once across the diagonal of a block.  The resulting blocks would then be sewn on the diagonal which put the other two sides as either straight of grain or crosswise grain.  In other words, the bias would be along the long seam.  Today I’m using triangles that would be considered part of quarter square triangles.  I actually have a bunch of these but they are much to big to end up with a 6” finished square so I cut these triangles to fit the required block size. The long side of the triangle is on either the straight of grain or crosswise of grain.  Having a non-bias edge on the outside maintains the integrity of the block.
Cutting directions are for 6”
When you cut the diagonals do not move your pieces until after the last cut.  The triangles should look like this. 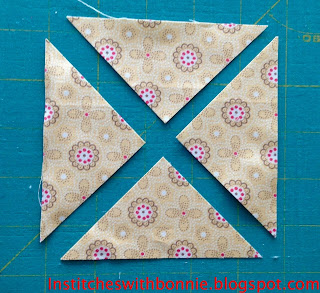 Here are the pieces that will make up this block. 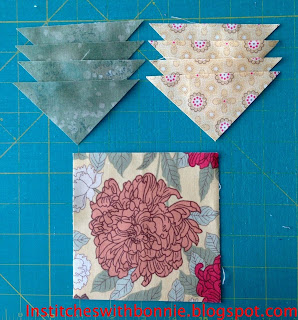 Sew two short sides of the triangle together.  When you sew the triangles be consistent.  In my case, I always sewed with the dark side up.  That way all of the finished pieces were the same. (Ask me how I learned this!!) 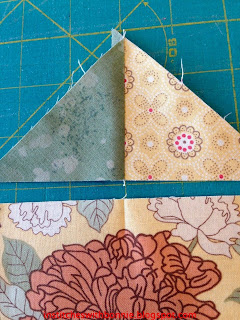 Lay out the pieces to match the finished block. To get the triangles unit in the center of the square fold the square in half and finger press the center.  Do it again folding the opposite way.  Then, match the triangle seam to the finger pressed spot. Pin and sew, right sides together. (Which, I assume you all know to do which is why I don’t mention it much!)

I ironed the seams toward the triangles on all sides.

I enjoyed centering the flower in the middle of this block. I can imagine a lot of cute fabric highlighted in the center of this block. And, I was happy it wasn’t all that hard of a block to make.  I can see more of these in my future.