Is Jack your friend too or perhaps a hated necessity in your life?  I've been keeping company with Jack way more than usual this last week or two. And, it isn't just one Jack in my life.  I hope you aren't doing the same thing.  Some of the Jacks in my current life. 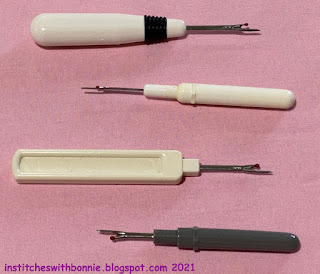 And here are all the Jack the Rippers in my downstairs studio.  I'm pretty sure there are at least two upstairs. 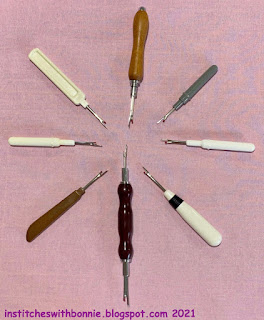 You might be asking yourself why I am being so friendly with Jack(s).  It's probably because I am having a heck of a time following directions these days.  It's been going on for the last couple of weeks.  I sewed several long seams wrong on the Cheese and Cracker top.  I didn't even realize it was more than one until after I finished ripping one out and had to rip the other one too.
And, this little piece has way too many seams taken apart.  Thank goodness they were all short seams.  (I'll be showing the whole thing on Sat, 1/30 or there abouts.) 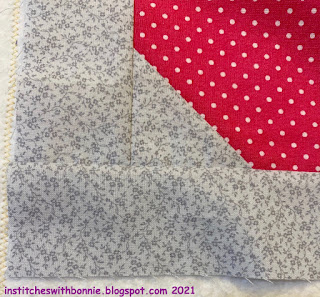 And what do you get after you do all that work to remove a seam?  Yea, nothing but a pile of thread! 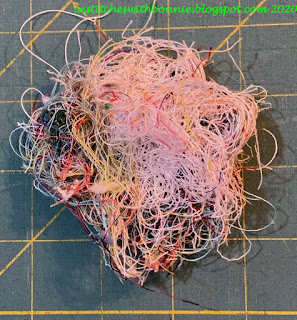 Here's why there is a lot of pink thread up above. 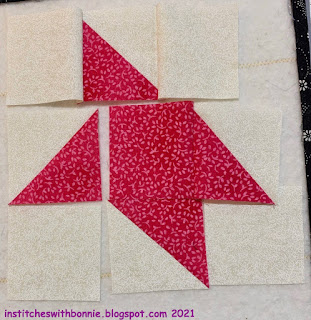 Yep, that is supposed to be a Friendship Star block in RSC's color of the month, pink.  Didn't turn out all that well without Jack taking care of it for me.
I thought since I'd just made 2 pink Friendship Stars I wouldn't have any problem with 16 grey with yellow stars.  Um, no, Jack lent a hand ripping out incorrect seams on a lot of the first blocks.  I'm hoping he can have a really nice rest once I get back to sewing the Friendship Stars. (The grey and yellow ones will be going in the T Shirt quilt I've been working on recently.)
I've decided I need to get a handle on why Jack has become my best friend the last few weeks.  Here's what I've come up with:
1. I've not been reading directions particularly well recently.
2. I don't seem to realize that turning one block wrong wrecks the entire block.
3. Maybe I haven't been getting enough sleep at night.  (I'm not completely convinced of this one as I slept over 8 hours one night and still made mistakes the next day.)
4.  Maybe I just feel sorry for Jack languishing away in drawers throughout the studio.
I'm looking for some great suggestions on how to avoid making mistakes while sewing.  I don't really mind ripping inaccurate seams but progress would be made a whole lot faster if I wasn't ripping out so much.  I'm hoping I can do much better over the next few weeks and months. Bye Jack!
I'm linking with these linky parties: Can I Have a Whoop, Whoop?,  Finished or Not Friday and Bolt to Beauties Beauties Pageant. Join in the fun to see what folks are up to.