Could be a new addiction

While in Maryland and working at the Faithful Circle Quilters show, I attended a demo on using wool felt. I've been putting a few pieces of wool on my A Tisket, A Tasket baskets and really like the texture and dimension it gives. Sandy McDonald gave the demo on Wool Felt Applique. She also donated two beautiful pieces to the Silent Auction. I was eyeing this one and made a rather large price jump in hopes of winning it. Sigh, not to be. 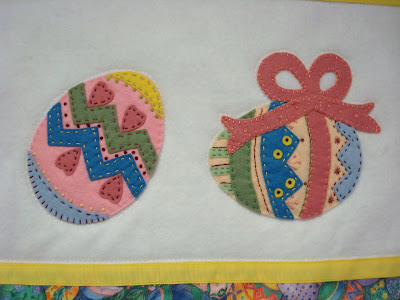 Sandy has designed some wonderful pieces. I like the modern look of this. Just the circles are in felt and then that part was bordered. (Well, maybe the black backing was felt too... Hard to tell here. ) Hum, neat idea. 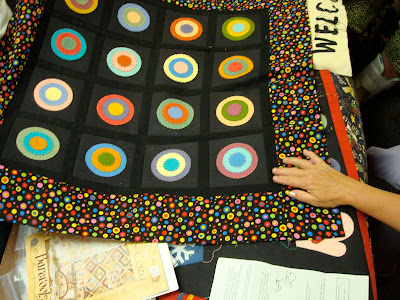 And, she has made some traditional ones. 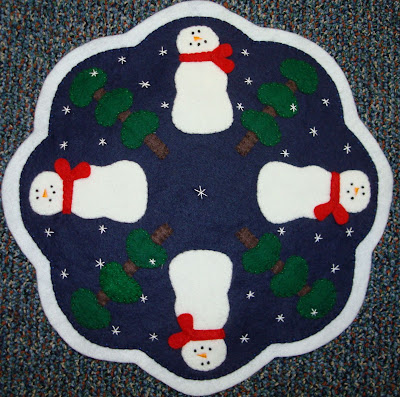 Here's one of her current projects... 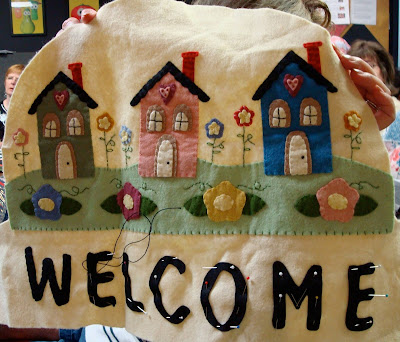 So on my drive home after that week I went out of my way to go to a shop that carried the wool. I now have a nice beginners collection and a pattern. Except, life has gotten in my way and I won't have any time to do anything for a while.
Sigh. Maybe later in the summer. Sandy thanks for all the information and sharing your wonderful wall hangings.
Not much stitching being done today. We're off to the big city to do a little shopping and have lunch out. Later I'll be volunteering at the library for the first time in a month. I hope to do a little computer testing before I go. Hum, maybe I should get going rather than surfing the web...
Happy Quilting ALL!