I volunteered to plan and run a block of the month for my local guild.  I thought I would share it with my readers if you'd like to play along.

Every month at least one 9” block that was used during the 1800’s will be presented. Hopefully I will be able to give you a little history of either the block or the quilt I found it in. There will be 12 blocks plus a pieced center medallion on point. I chose 19th century reproduction fabrics to go with the time frame of the blocks.  I have been collecting them since the 1990’s when modern fabrics were patterned after two quilts in the Smithsonian Institution collection.  I have added to it over the years as reproduction fabrics have become very popular.  I have added a cream background fabric although I am guessing I will have to buy a bigger piece than the ½ yard I currently have.  Because this is a sampler quilt I have not figured yardage to make it.  Pictured below is the general look of the quilt. 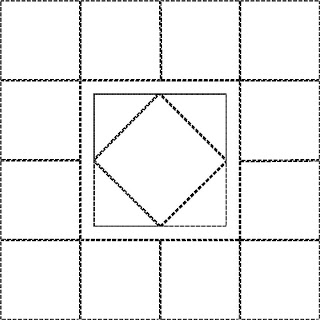 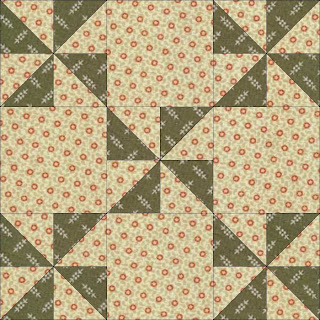 The first block was chosen from a pinwheel quilt made in Maryland circa 1812 to 1814.  It is said that the quilt was made while the men were away fighting the War of 1812, 200 years ago.  The quilt is part of the Textile Collection of the National Museum of American History. Instructions for the reproduction quilt and a picture of the original can be found in the book, Quilts from the Smithsonian by Mimi Dietrich, (That Patchwork Place, ©1995  Smithsonian Institution) The block is a variation of a 9 patch using pinwheels.  The original quilt is made up of 55 pinwheel variation blocks with plain blocks between. We’ll be doing only one block! To learn more about the National Museum of American History’s National Quilt Collection you can
Take a Tour of the National Quilt Collection
Cutting: from a light fabric cut 4  -  3.5” squares.
From both light and dark fabric cut 10  -  2.5”  squares. (20 squares in total.)
The Smithsonian quilt used the same light for both the pinwheels and the alternating blocks for the 9 patch as shown above. I used different fabrics because I didn’t have enough of the lighter fabric in the pinwheels.
Sewing: Draw a diagonal line down the center of each light fabric.  Pair up each light square with a dark square, right sides together.  Sew a scant ¼” from the line on both sides.  Cut on the drawn line.  Square up to 2” unfinished.  If your blocks are not quite big enough to square up cut the beginning squares to 2 5/8th inches.  Or use your favorite method of making 20 half square triangles that finish 1.5” or unfinished 2”. 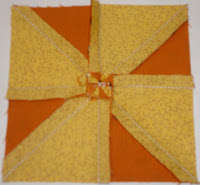 With the 20 half square triangles make 5 pinwheel blocks.  Sew the pinwheels as shown in the block.  Fan open the center seam to help eliminate bulk.  See picture. 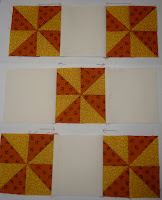 Sew into rows as shown. Press to the plain pieces.  Sew the rows together.
The first block is now done. 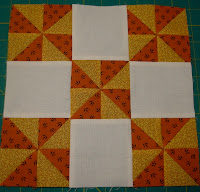 I will be posting one or two blocks or parts of blocks on the Sunday after the second Saturday of each month.  I plan to have the entire quilt done by November.  It should measure 36" by 36" before borders.  At this time I don't plan to put borders on it but once all the blocks are done I may change my mind.  If you have any questions feel free to comment or send me an email at brsinstitches@gmail.com
Happy Quilting All!