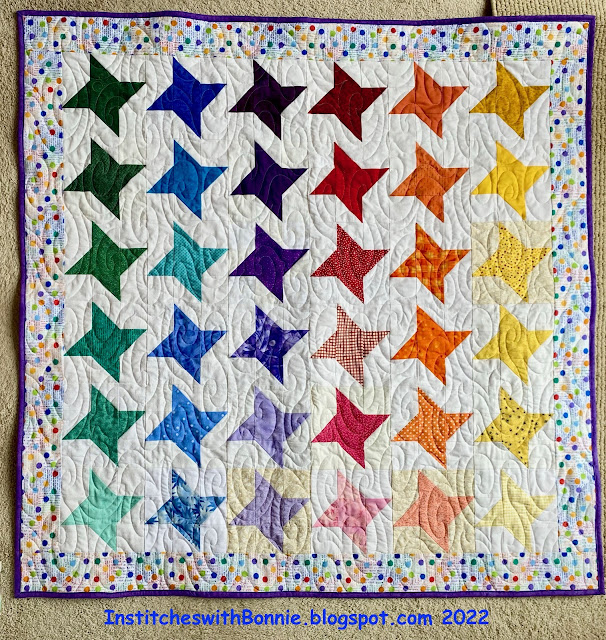 My finish is my 2021 Rainbow Scrap Challenge blocks. These are 6" finished Friendship Star blocks. I tried to move the colors from dark to light. Although, when I was making the blocks I didn't have that in my mind but it definitely worked. No pictures of the backing -- just look at the back of this quilt as I used the same backing on it and the same borders.  It's nice to be able to pull from the stash!

Now, back to Norfolk.  Last post I was sharing about our visit to the USS Wisconsin.  After lunch we took a 2 hour tour on Victory Rover Naval Base Tour.  The weather was beautiful that afternoon and we enjoyed the time on the water.  I took a lot of pictures but I'm only going to share a couple with you.  It was so interesting finding out about the Naval ships along with the businesses along the Elizabeth River. Naval Station Norfolk is the largest naval base in the world. Although we heard about so much Navy history, I had to look up the information about these specific ships. You can read more about the Naval Station Norfolk here.

First up are the submarines. I have no clue which ones they were because not much was showing.  I remember going on a sub when we lived in Norfolk. These are nuclear subs (if I remember correctly.)

We saw a lot of ships but only some of them I could identify from the pictures I took. So here are two of the ships we saw and I could figure out what I had seen.

This is the USS Bataan, LHD 5. It is named after the Battle of Bataan during World War II.  It is an amphibious assault ship.  The LHD means landing helicopter dock. My understanding is it has a complement of helicopters and someplace to store them on board. You can read more about LHD class hulls at Wikipedia. 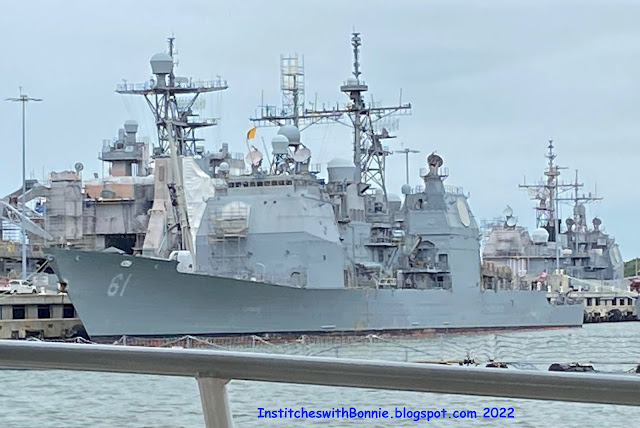 Unfortunately all the big aircraft carriers were out to sea during our visit.  I was on several air craft carriers while growing up.  Once I was on a dependent's cruise.  And, sad to say, I got sea sick.  Ugh.  Being around Navy ships was always interesting. But the moving every 2 to 3 years wasn't so much fun.  I ended up going to 11 different schools.

After the boat tour was over we had a great dinner at Grace O'Malley's - Irish Pub and Restaurant. Yummy food.  I had Cottage Pie and Pat had Bangers and Mash.  We followed that up with Bread Pudding. It was all wonderful.

I don't know whether we'll go back to Norfolk for more tourist activities.  But I am interested in the museum that has some great art and glass so who knows. Maybe we'll visit other cities and stay downtown. It was a lot of fun in Norfolk.

I'm linking up with the following Linky Parties.  Give a look at them and then find lots of different blogs to see what quilters are doing across the Internet.

Finished or Not Friday

We spent the whole day learning about some of the US Navy history in Norfolk.  My dad was stationed at the Naval Station Norfolk in the mid '50s so I remember going to the base and specifically to his ship.  It might have been where I put up a stink at dinner in the Officer's Mess because they only had canned milk. Hey, I was in 2nd grade, what do you expect?  Here's some info on the Naval Base which is the largest naval base in the world.