Thanks to Judy for sponsoring the Victorian Tea.  She really got into the spirit by dressing in a costume... now if we knew whether it was Victorian or not....  The food was scrumptious.  Have you had clotted cream?  Or how about lemon curd.  I'll never turn either down in the future!
Joan Strong presented some of her Victorian reproduction dolls and gave a brief introduction to dolls from 1870 to 1925.  Joan makes beautiful reproduction bisque dolls to order.  And, if you are so inclined, she can make soft-sculpted portrait dolls.  Joan doesn't have a web site but if you would like to contact her, her email is
jstrongdollmkr@aol.com 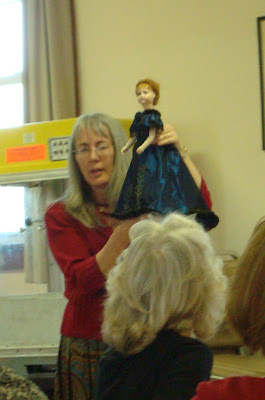 Here are some of the dolls she showed us with a little bit about them.  I believe all of these are Joan's reproduction dolls.
The doll in the blue dress is based on Empress Eugenia of France.  She was Napolean III's consort.  She lived from 1826 to 1920.  She was a trend setter in fashion.  Dolls of this time period were often based on real people.  They were elegant and not designed to be played with by children.  This dress is based on a gown by Fredrich Worth. 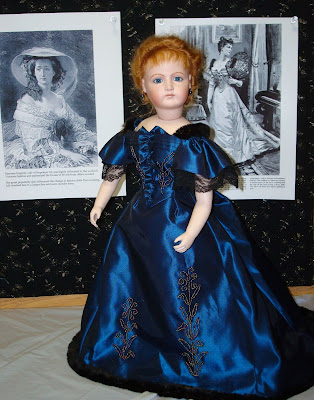 I didn't get full information on this doll in pink except that Joan used vintage fabrics for her.  The doll looks more child like rather than like an aristocratic lady. 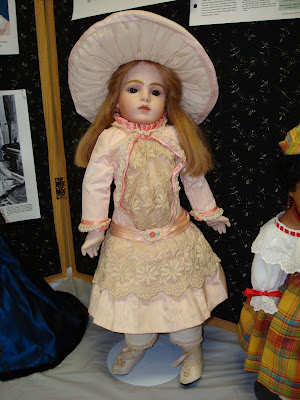 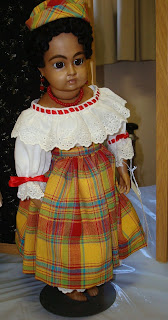 This doll was described as a character doll.  Joan chose to dress her in more casual style. But she mentioned that there were many dolls of color made with the same elegant dress styles as the blue one shown above.
Perhaps the sweetest dolls Joan showed were these two dolls. These dolls were made to look like her children.  The boy doll on the left is holding a picture of her son with the a cute smocked outfit.  Joan made a smaller version for the doll.  The little girl is sporting some of her daughter's hair.  Notice how these dolls actually look like children?  Joan said it wasn't until the beginning of the 1900's that people began seeing children as more than little adults.  Thus, dolls followed that trend. 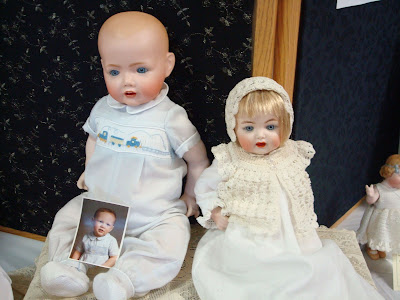 If you are a doll enthusiast and live in the Mid Atlantic area, you might want to visit Parade of Dolls and Bears 29th Annual Show and Sale on Sun. May 3 from 10 to 4 pm in Easton, PA  (If you want more info please leave me a note and pass on the phone number.  Why don't these people do web pages??)
Today was vacuuming day and the whole downstairs was done.  And not much else.  Slow and steady is my motto unlike my over-achiever DH who needs to have things done and then is sore and tired for several days!  Opposites attract!  Tomorrow will be a quilting day.
Happy Quilting All!  Bonnie
Posted by Bonnie at 3:02 PM