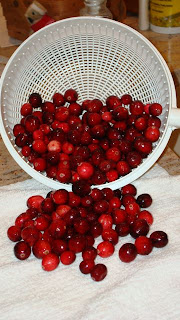 The dinner has been eaten, the dishes done.  I loved the look of these cranberries before I made the sauce.  I need some fabric that looks like that!  And, I wish my hands weren't covered in pumpkin pie filling yesterday ... I would have snapped a picture of that pumpkin as it was a beautiful color too!
We had a 16 pound turkey  -- didn't sound all that large but a little bit hung off  the roasting pan.  YUK -- the oils from the turkey were burning in the oven and every time we opened the door smoke poured out.  We had to have some windows open to keep the air clear.  But, wow, it was a very good turkey and made plenty of gravy. The carcass is now being made into stock so we can make soup some time this week.  And, these berries were great too! 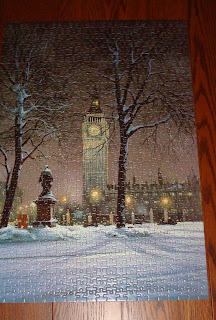 Jenny and Brian arrived and Jen hit the puzzle.  It took a couple of hours but we finished it off.  Weird puzzle -- we could actually put pieces in wrong and it looked right.  Finally when we were down to 6 pieces we realized we had to move some pieces so we could finish.  I've never seen that in a puzzle before.  This was only 750 pieces.  Next up is a cute black and white springer spaniel that looks like our dog, Christy.  Maybe we'll put that up tomorrow. 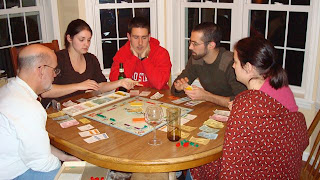 Here's a monopoly game we started after dinner.  Notice the hole where someone should be playing.  And, I was.  But, I spent the first 10 turns in jail.  We didn't have the rules so our rules were we could get out of jail with doubles or after the third time we'd get out.  Every time I got out of jail I either landed on go to jail or pulled a go to jail card.  Once I finally got out of jail and made it past the go to jail space I thought I was home free and could finally pass go and collect my $200.  Well, no.  I landed on a property and had to pay rent.  And then I landed on pay luxury tax and I was bankrupt.  I never once got to pass go!  What a riot.  We were laughing so hard.  Everyone else was buying property and I was just sitting there.  An hour or two later they are still playing but two more people have gone bankrupt. (Probably happily!)
Tomorrow is a sewing day for me.  I'm not interested in shopping.  I did cut some sashing out today.  If the girls go shopping which they are talking about doing I am going to start a new mystery quilt over at Mysteries for Relay.  Click on the button to go to the main page.  You might be able to join tomorrow and sew with us.
It's been a great day despite the smoke from the turkey cooking.  Happy Quilting, Bonnie
Posted by Bonnie at 8:32 PM